DRAMATIC rescue of four cats by Thai Navy from sinking ship that was also on fire.

A Thai Navy sailor has become a hero to four cats when he risked his life to rescue the cats which had become stranded on a sinking vessel, that was also fire. The day before the Navy had rescued eight crew members from the vessel that was near the island of Koh Adang.

After rescuing the crew the day before the Navy had returned to check on a potential oil spill caused by the vessel, when luckily First-Class Petty Officer Wichit Pukdeelon spotted the four stranded cats. Pukdeelon is part of the Thai Navy’s air and coastal defence division, and he explained how he spotted the cats.

He said, “I used my camera to zoom in to the boat, and I saw one or two cats popping their heads out.”

Thatsaphon Saii, aged 23 of the Royal Thai Navy’s Air and Coastal Defence Command Operation Unit 491, quickly jumped into rescue mode. Donning a life vest he swam out to the capsized boat in order to make the rescue.

Thatsaphon said, “When we arrived it was to secure the wreckage and check for oil spills. But we noticed the cats on board.

“I immediately took off my shirt and put on a life jacket so I could jump into the sea. The flames were at the back of the boat but it was starting to sink, so I knew I had to be quick.”

He also explained how relieved he was that he had been able to make the rescue, and said, “I’m so relieved that we were able to save the kittens. They would have drowned or died of thirst if they went into the sea.” 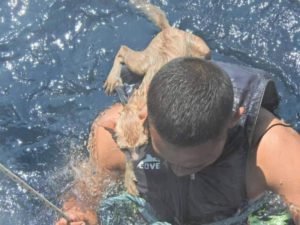