M6 reopened after fuel tanker and LGV crashes forced the overnight closure of part of the motorway.

CHESHIRE Fire and Rescue Service were called to two incidents on the M6 Southbound at Junction 17.

One involved a leak from a fuel tanker following a collision and the other was a crash involving a van and an LGV. 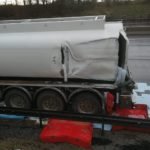 At around 2pm, three fire engines from Sandbach, Crewe and Knutsford responded to reports of a fuel leaking from a tanker on junction 17 of the M6 southbound.

On arrival the crews found a quantity of diesel fuel leaking from the tanker after it had been involved in a collision with a lorry.

Fortunately, there were no injuries.


For five hours, the crews continued to stem the flow of fuel and waited for two tankers to help with the removal of fuel from the vehicle. 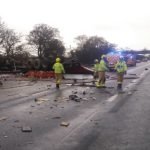 At around 2.20pm the same day, three fire engines from Alsager, Crewe and Congleton were despatched following reports of a second incident at junction 17 on M6 Southbound.

Crews discovered a van had been in a collision with an LGV containing a significant quantity of vodka and gin which had spilled onto the carriageway.


A quantity of diesel fuel was also dispensed, said the fire service.