PIERS MORGAN has, of course, expectedly weighed in on the news that Prince Harry and Meghan Markle are expecting their second child. The Duke and Duchess of Sussex revealed on Valentines Sunday that they are set to welcome a sibling for their son Archie.

The couple made the announcement with a black and white photograph of them sat under a tree with Meghan resting one hand on her currently small bump. Piers, a long time critic of the royal couple, gave his view on Twitter with a barbed comment about the photoshoot. Image: Dan Walker- Twitter 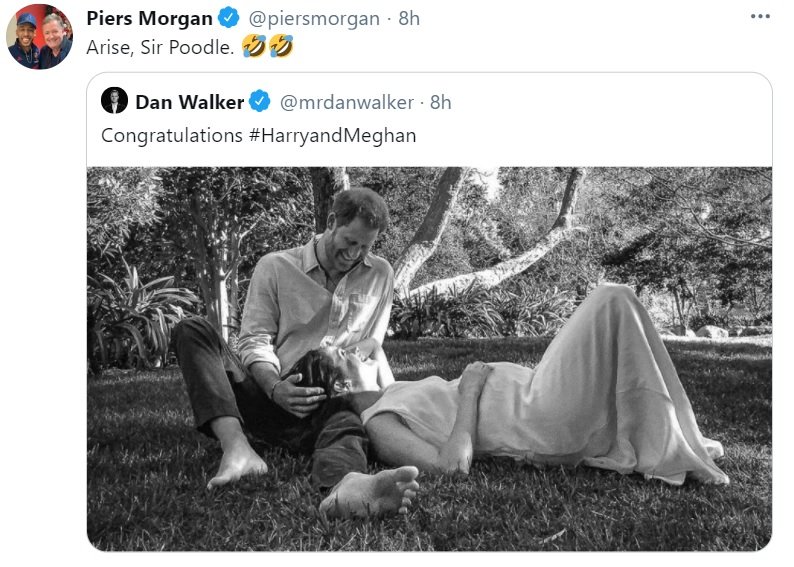 Sharing the picture he wrote: ‘BREAKING: Harry & Meghan have announced they’re pregnant and released this cheesy photo of themselves to ensure the media gives the story about their private life more prominence – in their latest courageous effort to stop the same media focusing on their private life.’

The news of the pregnancy delighted many but Good Morning Britain presenter Piers, 55, has been a long-standing critic of the couple, especially after they quit the royal family and moved from the UK to Los Angeles.


After it was announced that they would be adding to their family, Piers was quick to share his thoughts on Twitter about Duke and Duchess of Sussex’s big news. He slammed their ‘manipulation’ of the media, especially as the pair have often hit out at media intrusion into their private life.