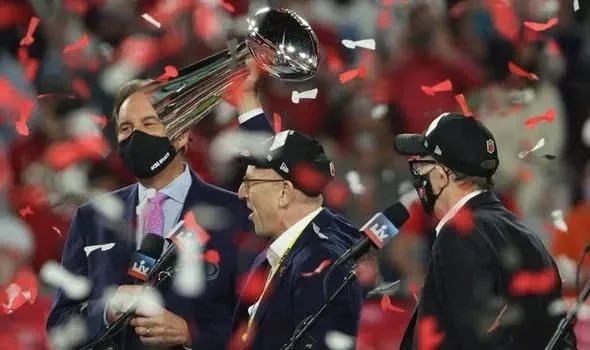 FANS of Manchester United watched on as the Tampa Bay Buccaneers won Sunday’s (February 7) Super Bowl – a team also owned by the Glazer family – who dominated the Kansas City Chiefs 31-9.

The Buccaneers led by Tom Brady, who won his seventh Super Bowl, has been transformed under the Glaziers, however, United fans feel like they have never felt the same love their owners have given the NFL franchise.

Their title run was sparked by the signing Tom Brady last summer, proving at 43-years-old just how good he really is, along with their strong defence – an irony of not lost on United fans. The club recently conceded three goals against Everton on Saturday, February 6.

A tweet read: “The Buccaneers defence was fairly tidy, a CB loan deal until the end of the season for Man Utd. Glazer fam you listening? We can really use a CB.”

One social media user wrote: “Hey Glazers Family,
Man Utd needs some cash for signings. They deserve it too.”

Supporters consistently voice their concern over the Glazer family’s handling of the club since they purchased it back in 2005 and have previously protested their ownership, especially about the amount of debt the club was forced to take on.