ACTRESS Evan Rachel Wood has made grave allegations against her ex-boyfriend, musician Marilyn Manson in a statement on Instagram.

The “Westworld” actress described her ex as a “dangerous man” who is said to have sexually abused her for years.

Wood had previously reported an abusive relationship in the past although hadn’t mentioned a name until now.

In the sensational post, she reveals: “The name of my abuser is “Brian Warner, also known to the world as Marilyn Manson.”

The 33-year-old continued: “He started grooming me when I was a teenager and horrifically abused me for years. I was brainwashed and manipulated into submission. I am done living in fear of retaliation, slander, or blackmail.

“I am here to expose this dangerous man and call out the many industries that have enabled him, before he ruins any more lives. I stand with the many victims who will no longer be silent.” 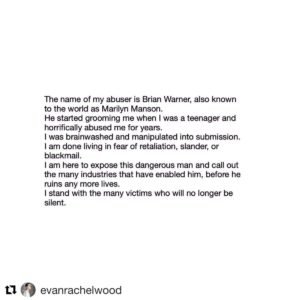 According to Vanity Fair, at least four other women are reported and have shared similar experiences with Manson in public. Wood shared some of the statements in a story on Instagram.

Marilyn Manson has not yet officially commented on the allegations. Manson’s agents, who Vanity Fair said were not immediately available for comment, have “categorically denied” similar allegations in the past.

News
London, has announced that that new policies are under consideration that it is hoped will reduce traffic the city by 27%, one of these...

Celebrities
Jessie J reveals the 'loneliest time of her life'. The pop star has opened up to fans.Singer Jessie J has revealed details about her...