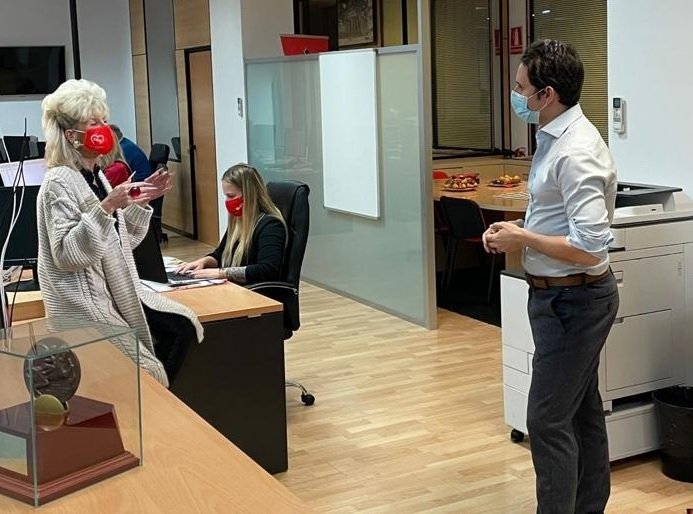 CEO of the Euroweekly News, Michel Euesden, was interviewed by a BBC news team at the EWN offices on Friday. The short documentary was intended to explain just how life is changing on the Costa del Sol for the many thousands of expats the paper serves now that Britain has left the EU.

The team, led by BBC journalist Gavin Lee, were welcomed back into the offices of the EWN after having been the subject of a previous BBC documentary filmed in Mijas, back in February 2020.

Michel started the interview by thanking Gavin for choosing the EWN as their ‘go-to’ for any information regarding Spain’s Costa del Sol and Costa Blanca, while in the background, the full team of EWN staff were busy preparing content for the paper’s next six editions. Everyone, of course, observed the covid rules, with proper social distancing and wearing their red EWN masks – it was quiet but hectic!


Gavin asked Michel to explain the EWN headline for that week’s edition, ‘Better Brexit Deal’, she described how it affected the typical expat pensioners who, used to surviving on their fixed incomes, were now finding it harder with electricity pricing just experiencing a hike.

‘You are either in one camp or another’ said Michel, describing how Brexit would affect the daily lives of the thousands of expats that live on the Costa del Sol. She took as an example a stereotypical ‘white van man’, doing removals and a bit of handiwork to supplement his pension and living his life in a ‘Little Britain’ bubble. ‘These sort of people have all been part of the landscape for the last 32 years or so,’ said Michel.

The interview over, Gavin thanked Michel, Steven and Nicki for their help and co-operation and looked forward to the next time they would visit, maybe to see just how Brexit has changed the lives of British expats living in Spain 12 months on.