FBI Agents warned Wednesday, October 27, that a major ransomware assault is underway against American hospitals, some of which have already been attacked by a gang of cybercriminals.

Ransomware is an increasing threat to US healthcare and has already cost hospitals tens of millions in recent years.

A typical attack encrypts important data, such as patient records and billing information until the hospital agrees to pay an exorbitant sum for ransom, usually in the form of Bitcoin or other digital currency.

Wednesday’s alert came from a joint federal task force that includes the FBI, the US Department of Health and Human Services, and the Cybersecurity and Infrastructure Security Agency (CISA).

At least five hospitals were hit with the ransomware attacks this week, the federal agencies claim.

“CISA, FBI, and HHS have credible information of an increased and imminent cybercrime threat to US hospitals and healthcare providers,” the advisory said.

“CISA, FBI, and HHS are sharing this information to provide a warning to healthcare providers to ensure that they take timely and reasonable precautions to protect their networks from these threats.”

“We are experiencing the most significant cybersecurity threat we’ve ever seen in the United States,” Charles Carmakal, chief technical officer of the cybersecurity firm Mandiant, said in a statement. He’s concerned that the group may deploy malware to hundreds of hospitals over the next few weeks.

Alex Holden, CEO of Hold Security, which has been closely tracking the ransomware in question for more than a year, said the group was demanding exorbitant ransoms well above $10 million per target and that criminals involved on the dark web were discussing plans to try to infect more than 400 hospitals, clinics and other medical facilities.

“One of the comments from the bad guys is that they are expecting to cause panic and, no, they are not hitting election systems,” Holden said. “They are hitting where it hurts even more and they know it.” 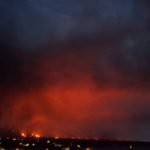