As of 2020, roulette is theoretically over 365 years old, but it could be even older than that in reality. The ancient casino game’s origin is not totally understood or established, but in this article we will follow the most popular and widely accepted beginning of roulette, and its progress through the many centuries.

There could be older origins, but the most convincing theory is that French scientist Blaise Pascal (yes, the same person after which the unit of internal pressure is named) accidentally invented a crude form of the casino game in 1655, while he was trying to build a machine of perpetual motion.

Other than the Pascal theory, there are also suggestions that the idea in its crudest form might have originated at separate times in separate cultures which are thousands of years older. While Greek and Roman soldiers might have been only playing a betting game on their shields and chariot wheels, ancient Chinese civilizations may very well have been playing a more standardized and advanced variant of roulette that closely resembles the modern-day casino game. Either way, none of these theories have more credence or proof than the Pascal theory. 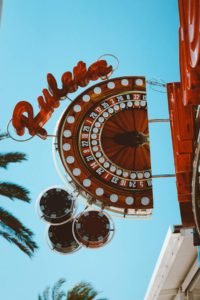 Rise of Roulette in Europe

It was not until the mid-1790s that roulette managed to gain enough popularity in Europe. Once it did gain popularity as one of the more interesting casino games, it became so popular that we can find mention of roulette in European literature of the time.

It wasn’t until the year 1842 that the roulette wheel received a major rehaul. Before the new wheels came into being and managed to become even more popular than their predecessors, all roulette wheels in Europe had two zeros on them.

In 1842, Francois and Louis Blanc changed the history of casino games forever by making a single, game changing modification to the old roulette wheel. They simply removed the double zero from old wheels and that was pretty much all it took for European roulette to become more popular across the continent than even before.

They brought the new wheels and the game of roulette to Humbug from France, then to all of Germany and later on, pretty much the whole of Europe. The fact that these new wheels decreased the house edge in roulette down to 2.7%, as compared to 5.26% with the old wheels, only fuelled the popularity of roulette amidst European gamblers even more.

Roulette’s Entry into the US

Online Roulette: The Biggest Step for the Game Ever

The introduction of online roulette came in roughly around the beginning of the 21st Century, which was quite a few years after the first online casino was launched in 1996. Online roulette changed everything and for the better. While there were some initial issues with fair play, that has been sorted out now. If you have never played roulette online, or you are looking to learn the rules that govern the game, get to know all the rules on this site.

Players can not only play any version of the game that they want today, but they can practically play anywhere they want to. Smartphones, tablets, laptops, desktops and even some smart TVs are now capable of streaming live casino roulette games, or letting the player try their luck in a virtual version of American/European roulette. Wherever you might be located, if it’s legal to gamble online in your country, we suggest playing European roulette for a significantly higher chance of winning.

News
youAn investigation has found that a cult like Christian society was allowed to flourish at Winchester College and to be used by a barrister...