Britney Spears finally opens up in court about how she feels about the popular #FreeBritney movement and her conservatorship being in hands of her father, Jamie Spears. 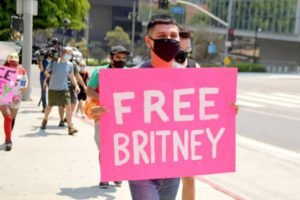 The singer’s attorney confirmed the conservatorship is voluntary although she strongly opposed her father still being the sole conservator and deeply prefers to have a qualified corporate fiduciary appointed to serve in this role.

This week Britney’s legal team filed a motion opposing a request by Jamie Spears on keeping her conservatorship case secure, it’s been sealed for years at his request. As a result, the pop star asked the court to open her case to public scrutiny after his father still argues that as it is a family matter it should stay away from the media and must be treated in private.

Along with the previous statement, Spears also remarked that she wants to have the “power and authorization to pursue opportunities related to professional commitments and activities including but not limited to performing, recording, videos, tours, TV shows, and other similar activities as long as they are approved by the conservator of the person and her medical team.”

Fans to the rescue! It’s been years since the #FreeBritney movement started arguing that their idol is being held captive by the conservatorship, they even have joined forces outside the court hearings with billboards and claiming that they have “proofs” to support their theories.