LAST night, Friday, August 14, EWN was lucky enough to bear witness to Fuengirola’s very first doggie wedding. However, there was not just one ceremony but two! And they were a ROARING success!

Melanie Parker-West, an expat on the Costa del sol, originally from Leeds, came across the idea when thinking of events she wanted to do for her dog grooming business Groom Palace.

“I used to have a purple mobile dog grooming van in Essex for a while where this kind of thing would go down a treat. I always said I wanted to do events for dogs so they were included. Now I would like to cover doggie weddings, birthday parties and even a remembrance service after a funeral.” 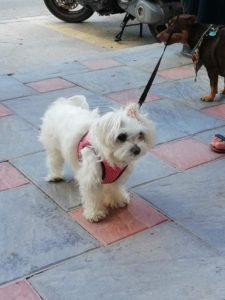 There was a big turnout for the event with many of Melanie’s clients and local dog lovers who had heard about the doggie wedding. There was a bloodhound in a top hat, a tiny chihuahua in a pink bridesmaid dress. Winston the British bulldog was the ring bearer, Dyson, one of the grooms in a lovely little waistcoat and many others in tiaras and little dresses.


Melanie pointed out that “The best thing is it was really nice for everybody to come together and put their all into it. The bride’s mothers had put so much effort into making them dresses.”

During the doggie wedding services, the attendees were served champagne whilst the pups enjoyed Melanie’s own doggie ice creams she makes for her clients in the shop.


The service itself was the full shabang, first up was little Norman who waited patiently at the altar for Bonnie to arrive in the wedding car.

There was even a celebrity vicar, Mark Jenkins, from Channel 4’s the hotel, who is a family friend.

Talking of celebrities, the whole event was being filmed for a UK TV show so keep your eyes peeled and you may be able to see it on your screens soon.

Once the services were over it was across the road to the reception and dogs honeymoon at Aidan’s Bar, run by the fantastic Alan and Sharon.

Here they were served gorgeous profiteroles, vanilla slices and chocolate cake as they danced into the night.

The whole doggie wedding seemed to go off without a “hitch” and as it was such a great night I am sure we will be seeing more from Melanie and Groom Palace.