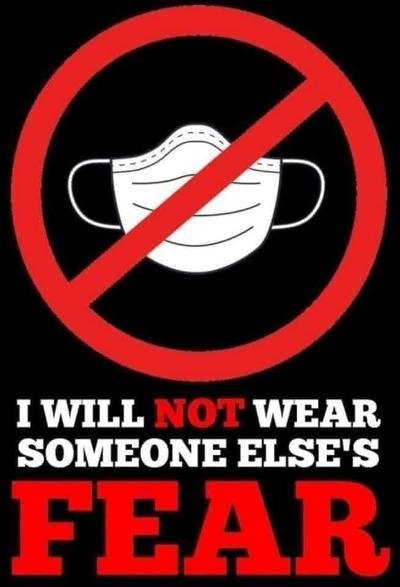 An anti face mask protester says “don’t follow Spain” as he celebrates the news of a sacked KFC worker being reinstated after refusing to wear a face mask.

KFC worker in Bridgend, South Wales, Paul Candlin was dismissed for refusing to wear a face mask whilst at work.

Candlin was fired on the spot by KFC bosses as he point blank refused to wear a mask designed to protect customers from Covid-19.

The fired KFC worker took the matter to Cardiff area based solicitors, who advised him that wearing a face mask in his position of employment was not law and that if they didn’t reinstate him, then he should pursue a claim for wrongful dismissal.

Taking the advice back to his KFC bosses 24 hours later, the fired worker was given his job back.

The news was music to the ears of Steve Thomas a staunch anti-mask campaigner, who campaigns vocally daily and the media against the use of face masks, Thomas posted to his social media channels, where he has thousands of followers in agreement said:

Thomas who advises everyone to stand up and ignore face mask requests or laws and believes it to be a civil liberty, held an interview this morning with the Euro Weekly News in Spain, who have been advocating everyone to stay safe and to take all precautions at all times, Thomas said:

“We should all stop following Spain, that’s all people are doing including politicians, wearing a face mask will not prevent you from Covid-19, I know you are all wearing them over there but there is no scientific proof that it works – it’s also against your civil rights.”

Thomas then questioned on the virus itself said:

” Look, take DW Sports, gone bust and how many jobs lost? There will be many more companies to follow, especially in the tourism industry like you rely on in Spain, but as long as you are safe from a mild virus it makes it all worthwhile? – look a ticking time bomb of deaths due to doctors’ surgeries being closed and hospitals 40 per cent empty. The death toll of this will leave Covid way behind.

“But hey ho, stay safe and call for more restrictions and don’t forget – wear your masks of which symbolises a bloody muzzle,” he sarcastically replied.

On the subject of further lockdowns in countries he replied:

“Listen to Katie Hopkins, she’s spot on once again, says it how it really is, although there will be those who beg our Prime Minister to be locked up because they really do believe that they will be safe with these lockdown draconian laws.”

He then ranted: “I said a couple of weeks ago you are five times more likely to die of a lightning strike than Covid, so there’s more reason to stay inside at the moment.”

When questioned further he said: “Pubs to shut so schools to open as well? This is just a game of control for the establishment, the same as forcing people to wear muzzles, all of this they know will frighten the public so much over a virus no worse than a bad dose of the flu.

“Even if you get this raging inferno of a bug, your survival rate is 99.975 per cent, us the general public have had enough of the establishment’s bull and I ain’t going to play along in their games of control and submission – if everyone removes the muzzle in every country in the world like yours in Spain, everyone can get on with life and return to business and work, and that’s what I campaign for.

“Stuff lockdowns, stuff muzzles, let’s get back to work – the governments in Europe need to man up and get on with it instead of pussyfooting around watching people get basically the flu, people are hardly dying now, that part’s went and the numbers that did were still far lower than those who die of the flu each year, it’s not Coronavirus killing us, it’s the governments, let’s just get on with it.

“I was in Spain recently – empty streets, empty bars, empty restaurants, I really feel for the expats over there, Boris Johnson has stitched them right up with the quarantine for his government’s own pockets that’s for sure, that needs to be overturned too, but don’t start me off on that score,” the campaigner finished.