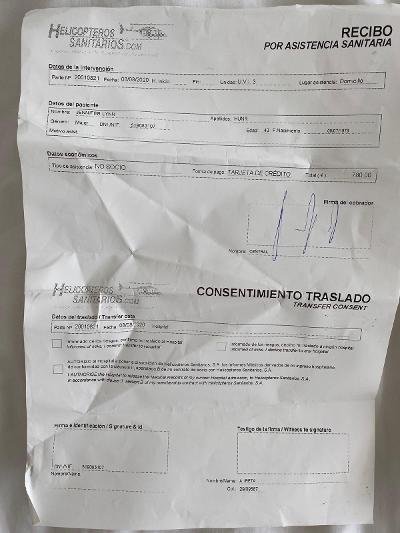 A woman who had a few too many cocktails on Spain’s Costa del Sol fell breaking her ankle on her way home outside Palm Beach in Fuengirola.

As she writhed in agony on the floor her husband called her an ambulance, but on arrival, they refused to treat her or take her to hospital as she couldn’t provide insurance documents.

As the ambulance drove off and his wife in floods of tears, screaming from the pain, the husband saw another coming down the road and jumped out to hail it down.

The crew fully explained they were a private ambulance service and asked if they had private cover for the service, to which he thought he had and took it as meaning the insurance back at the hotel, and off they travelled to the hospital in Marbella.


As they departed the private ambulance, the husband provided his details of where he was staying and his residential address as his wife was trollied into the casualty department.

According to a close source, a pal of the couple who lives in Los Boliches told the Euro Weekly News:

“My pals a bit embarrassed to speak to you himself, but he’s in shock at the size of the bill at the moment, it’s come to 780 euros! he had a few beers on board after a cracking night out on holiday, we did have a blast to be fair, I met him  a few years back and we’ve kept in touch ever since and I bumped him to him by fluke the other day up the town, we had a few ales and his wife went around the world on cocktails as you do when on holiday”

“I told him, you would have been better getting a taxi and saved yourself at least 600 euros, trouble was he wasn’t thinking straight after a few bevvies and just saw the word ambulance and to be fair his wife was screaming in agony, shame I wasn’t there I could have told him and explained it was a private ambulance and that really you need to be on a plan with them like I am, to be fair they offer a great service unless you fall over drunk and break your ankle and aren’t on a plan” he laughed.

“Seriously though, I’m quite shocked the standard ambulance didn’t take them, it’s not as if they were legless”

The injured woman has now been fully plastered and on the road to recovery despite the shock of the bill.

SAGE has dire predictions for the UK government