the art of publishing
More
Home News Spanish based multi millionaire winds up the British as he calls them... 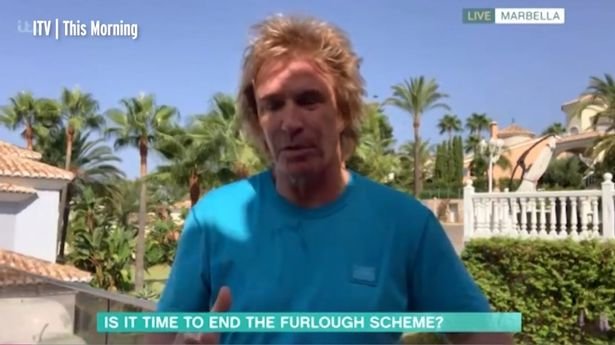 Viewers watching TV programme “This Morning” were outraged as Spanish based businessman Charlie Mullins went on a live interview and blasted the British lazy.

Charlie Mullins who owns Pimlico Plumbers in the UK, said how felt and said:

“To get people back in the workplace we need it to end furlough as soon as possible.

“Let’s not kid anyone, the majority of people in the UK are now in a position to go back to work – but unfortunately they don’t want to.”

“If you’re paying people to sit at home, that’s what they’re gonna do,” said Charlie.


“Most people’s workplace is too far from the beach for them, so we need to end it, it’s had its day, it did what it needed to do at the time.”

“We now need to move on, get the economy going, get people back into the workplace, and stop this stupid culture of people thinking they can just sit at home and be paid for it.”

“I think it’s very selfish that some people are working at home and couldn’t care less about nobody else or the economy,” he further added.

If that wasn’t enough he threw in for good measure:

“People are sitting about in their pyjamas and I don’t think they are going to be motivated enough to say they’re doing a proper day’s work.

“I don’t believe it’s the way forward.” he finished as he stood in the Marbella sun.

Whilst complaints flooded out in the UK at the outburst especially across social media’s Twitter, fellow Brit’s were in total agreement with Charlie.

“Charlies bang on, the British are bloody lazy, they don’t want to work anymore, there’s no point sitting on Twitter complaining Charlies in Marbella, he’s worked his ass of to be able to”

“Many mates I know in Birmingham are laughing about being on furlough – citing it’s the longest holiday they have ever had!”

Steve Day, a founder of The Pine Warehouse and Oak Furniture Land was another in agreement:

“One big jolly that furlough, Charlies hit the nail on the head as always, people only moan because they know it’s true really, even my own daughters are swinging the lead on it, they are down the beach everytime the sun comes out at home”

Whilst Jimmy Mullins a retired businessman from La Cala summed up the feeling when he said: “Charlie for Prime Minister, at last someone saying how it actually is”