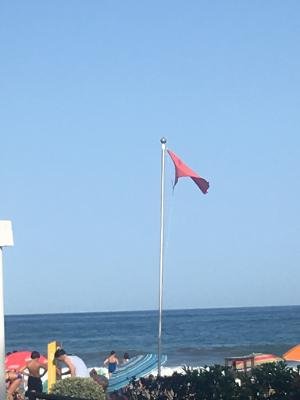 High waves up to 15 foot and dangerous life-threatening rip tides struck Spain’s Fuengirola this afternoon, stretching lifeguards to the limit.

The normally peaceful waters at this time of year, turned into ravaging life-threatening seas as waves hit the beaches at times as high as 15 foot on times, launching wave jumpers right up the beach due to the force.

At 4 pm lifeguards feared the worst after two children aged 5 and 7 couldn’t get back to shore after being pulled out by rip tides formulating, 3 lifeguards dashed to the rescue on the front of Los Boliches to save the children, whilst a crowd gathered to watch in fear.

As the rescue took place an elderly couple in their mid 60’s were dragged out by yet another riptide at the Torreblanca end of town, once again thankfully rescued by lifeguards using their bodyboards.


Authorities took to the seafront tannoys to warn everyone out the sea whilst the red flags were raised across Fuengirola beaches.

Despite the warnings, a serious incident took place as a young Swedish woman took to the waters and was smashed by a 10-foot wave before being dragged out into the Med, close to the Hotel Yaramar opposite.


Four lifeguards charged once again into the raging waves in a rescue attempt as the woman waved her arms in distress.

The tide though was so strong, a rescue boat was called from Fuengirola Port as the woman had drifted at least half a mile out and past the safety markers for jet ski riders and boats, thankfully again she was dragged from the waters to safety.

Although no actual deaths took place today, thanks only to the local lifeguards and they’re quick reactions, lifeguard Marcos Lopez fumed: “If we put the red flags up, simply stay out the sea, for some reason we are suffering a high rate of rip tides which are unexplained for this time of year but the sea will always have a mind of its own”

“Remember you are risking your own lives as well as yours,” Marcos told the Euro Weekly News – “If the red flags up, stay out the water” he finalised.