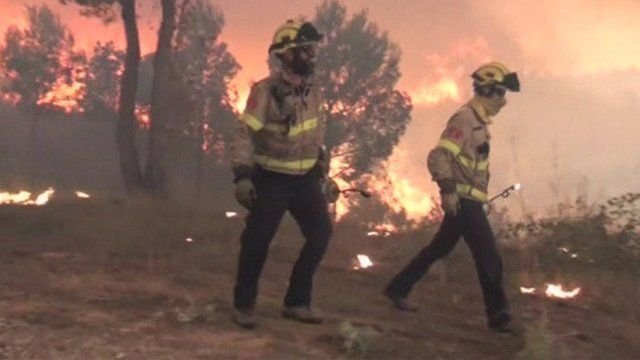 Firefighters on Spain’s Costa del Sol have gone on RED ALERT as temperatures are set to soar yet again.

Temperatures on Spain’s Costa del Sol are set to soar yet again after the recent heatwave and now firefighters have been placed on red alert as another storming heatwave is expected.

With temperatures set to soar again, up to 39 degrees along the Spanish coastline, following on from last week’s temperatures that peaked at an amazing high of 45 degrees in some areas, all firefighting leave and days off have been cancelled as all firefighters go on standby at all stations.

A fire officer from the Bomberos, attending a bin fire in Torreblanca hills told a Euro Weekly News reporter this morning:

“We have all been placed on standby and on red alert ready for fires again, all days off have been cancelled because the fire chiefs are expecting large fires.

“The fear comes after the last heatwave and the grounds, grass and forests are literally bone dry – one spark and it could all go off after so much dry heat, everyone was hoping for rain yesterday, but it didn’t arrive despite there being a 30 per cent chance, which was a shame as it would have dampened the grounds out a little bit, but here we are attending bin fires simply because citizens are not taking enough precaution.


“A simple bin fire like this can trigger a full mountainside burn out risking life.

“All citizens need to be extra cautious, the heat and dryness hasn’t been this bad for many years and quite truthfully the chiefs are fearing the big one like the one that’s taking place in France right now as Marseilles is evacuated,” finished the firefighter.