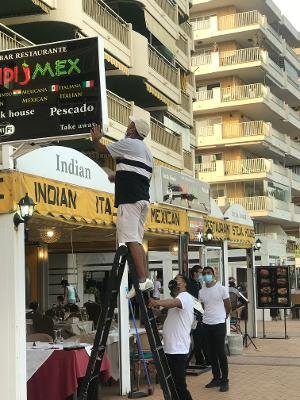 Business is tough, really tough on Spain’s Costa del Sol as traders do everything to attract business.

Advertising signs, being one of the cheapest forms of advertising for trade is normally pretty static but as numbers of tourists are in low numbers a sign war is breaking out along the coast.

Kevin Wilson who runs a bar/cafe in Los Boliches told the Euro Weekly News how he’s had 6 signs already stolen from outside his establishment in just the last 14 days:

“I’m getting fed up of this, someone is stealing my signs, I have gone through 6 in the last 14 days, I place the large sign outside my establishment but as soon as I turn my back it’s gone again, I even chained it to a post, it lasted longer than others but then the thieves used bolt cutters to cut it free – how mad is that?” he exclaimed.

He further added: “It’s not just me either, many businesses are reporting the same thefts, it’s clearly aggrieved competition battling for trade, if they think nicking my signs will make a difference then they better think again, I’ve got my brother sitting outside the front of the house now with a baseball bat just in case, factories and sign making suppliers are closed now during August so I can’t afford to lose this one – and I won’t” he firmly stated.


Meanwhile, another tactic being deployed is the re-positioning of signs to take the best advantage point, often blocking out competitors signs as potential customers walk along the seafront operations, with a tremendous choice of availability, causing heated arguments and discussion.

Adam Lemmings in Estepona told how he came to work in the morning to note his sign had been totally obscured by a neighbouring business:

“I couldn’t believe it,  I was walking to open up and looked up and thought, wheres my sign? – then I realised next door had increased their signage by four times the size, totally blocking mine out of view”

“I went straight in to complain, but it fell on deaf ears as the German owner told me to get stuffed and get lost, we normally get on fine since he moved in, although I have noted I have been far busier than them, I guess that’s cheesed him off”

“I’ve tried to reason with him, but his attitude stinks now – its war!”

“I’ve ordered one even bigger to blast his out of sight” he stormed.

It certainly seems the game many traders are currently deploying as a strolling EWN reporter yesterday caught on camera movements of signs after the earlier reports to our news desk.

At one establishment a sign was being moved from one side of the bar to another, pointing further out into the street, whilst “minders”  surrounded the situation.

Local resident Hugh Evans said: “It’s been going on for weeks, look they take minders out with them now look- it’s getting tasty!”

“That signs now blocking that sign look, that’s why they are mobbed up as they move it”

Gary Adamson though, the Managing Director of Bars Abroad made a valid point as he told the EWN reporter: ” There’s only going to be one winner, that’s the Town Hall as they will issue fines for non-regulation signage, yes it’s going on at present but once the fines start getting dished out it should stop, It can’t come soon enough mind, I was showing a client around a bar the other day and just a couple of doors down, a full-blown punch up broke out over signage in Benalmadena”