the art of publishing
More
Home News Costa del Sol COVID on the spot testing as police clamp down... 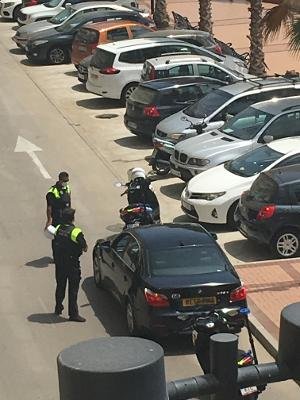 With numbers once again on the rise in Spain, Costa del Sol cops are now targetting cars displaying GB stickers or British number plates insisting on an on the spot COVID test

Whilst airports are covered with regulations and temperature tests, it still remains that you can drive across Europe untested and it appears cops are taking no chances.

Bike patrols today are pulling in all cars displaying UK number plates, checking paperwork and insisting on a COVID and temperature test.

The operations are taking place in all coastal holiday towns as well as on the main AP7 motorway.

James Langford who was “pulled” by two cops and tested this morning whilst driving his British plated BMW told the Euro Weekly News of the new procedures and his experience, h said:


“I was minding my own business driving along the front in Fuengirola since arriving Friday evening from Plymouth, two cops on bikes came up in my rearview mirror and then one overtook and took the front position, to be honest, I was thinking surely they can’t be pulling me as I hadn’t done anything wrong and was at slow speed”

“The blue lights started flashing on the front bike and the cop stopped, as the rear cop blocked me from behind, not as if I was going anywhere fast, first they took all my documentation and then ordered that I take a COVID test and a temperature test”

“I asked if I had to and they replied yes, despite the fact I told them I had one before leaving the UK so I could get the correct travel insurance cheaper, first they took a temperature test and then a swab, I also had to provide an address from the apartment I am staying in”

“The policeman said it was now standard procedure, I wasn’t that bothered, in fact, it’s something I applaud, it only took 20 minutes in total really but not something I was expecting, I was told nothing further would happen but to inform the local police station If I move address in the next 14 days”