Drivers stuck in heavy traffic on a busy motorway in Gran Canaria couldn’t believe their eyes when they saw what was causing the hold-up!

A 75-year-old pensioner decided to save time by taking the quickest route back to his home, the motorway. However, little did he realise things would not work out as had planned. Apart from crawling along at the lighting speed of 10Km per hour, the pensioner also drove on the LEFT-hand side of the motorway with NO LIGHTS!

As you can image, drivers were soon on their mobiles phones calling the police, according to one driver the sound of angry drivers horns echoed through the tunnel- even then, the man, holding on for dear life, patiently navigated the tunnel until he appeared at the other end!

Citizens of Las Palmas de Gran Canaria are more than accustomed to traffic jams and hold-ups occurring in the Julio Luengo tunnel- but this was a first! 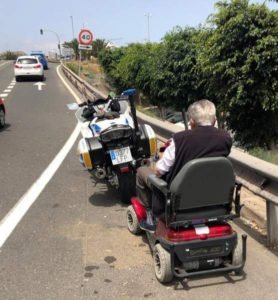 Motorway police were waiting for him at the exit of the tunnel and immediately made him pull over. Apparently he was completely unaware he was committing any crime at all. Police decided not to charge the elderly man, he was confused and lost after-all. They do say that everyone has their 15 minutes of fame in life! TW