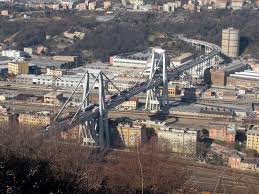 Italy’s new Genoa bridge will be inaugurated “on a day between August 1 and the 5th,” Genoa’s Mayor and reconstruction commissioner Marco Bucci announced Monday, nearly two years on from its collapse which killed 43 people.

The replacement bridge was designed by Genoa-born architect Renzo Piano and features structures formed like sails to represent the city’s history as a great maritime power.

The new Genoa bridge is currently undergoing static testing. A stress test was completed as 56 lorries passed over the new construction.

The previous Morandi Bridge collapsed on August 14, 2018. The Benetton group has been accused of failing to carry out maintenance on the bridge allegedly resulting in its collapse. The group will now begin to leave Italy’s motorway management and reduce its stakes in motorway company Autostrade per l’Italia to zero.