Anthony Joshua was pictured hugging an 87-year-old superfan while enjoying a night out with friends at Marbella hotspot La Sala in Puerto Banus.

Heavyweight champion Anthony Joshua hugged an 87-year-old superfan as he appeared to ignore local rules over social distancing and face masks during a night out in La Sala Puerto Banus. The champion hugged Doren Miller when she told him she was his biggest fan whilst he was out partying with pals at the showbiz haunt in Marbella where he is holidaying. 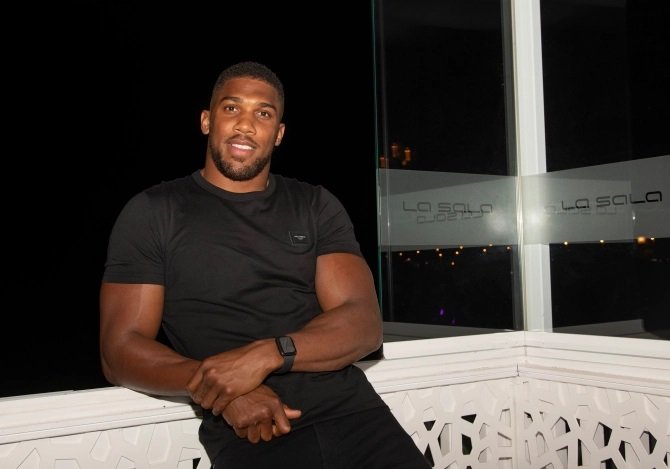 Joshua enjoyed fine dining and music at Marbella hot spot, La Sala Peurto Banus, he has spent the past week in Spain as he awaits a new date for his next fight. image. Twitter


Superfan Doreen looked over the moon and couldn’t believe it as Joshua came over to sit down next to her and asked her who her favourite boxers were. The starstruck great grandmother said she liked Muhammad Ali and Floyd Mayweather before saying to Joshua: ‘but you’re the best.’ The Brit laughed and replied: ‘I’ll take it!’ before posing for several pictures with her

The boxing world champion, who is still nursing a knee injury which has caused his next fight, against Kubrat Pulev, to be backdated until the end of the year, was out enjoying some fine dining at Marbella hotspot La Sala Puerto Banus with a large group of friends before being introduced to Doreen Miller.


While he was here, the champ has opened a brand-new shop in Puerto Banus. Known as The Hyde Store The Concept, it’s very much an urban-themed shop and he has teamed up with local entrepreneur Haitham Osman to sell a collection of shoes to the jet-set who visit Banus.