Katie Price’s son Harvey has been rushed to hospital and is at risk of organ failure.

HARVEY, 18, who has a number of health conditions, and suffers from *Prader-Willi Syndrome, was rushed to hospital after struggling to breathe, and with a soaring temperature. Katie was left terrified after her son Harvey was rushed to the hospital for the second time in as many weeks.

A representative on behalf of Katie told The Sun: “His condition is very dangerous and Katie is terrified. “He has a temperature of 42 degrees and is struggling to breathe. 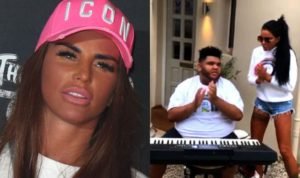 “One of his conditions is adrenal failure that could cause his organs to fail and is very dangerous.” Lovable Harvey, has had many supportive father figures. The relationship between Harvey who is visually impaired, autistic, and his dad, former Manchester United footballer Dwight Yorke, is virtually non-existent.