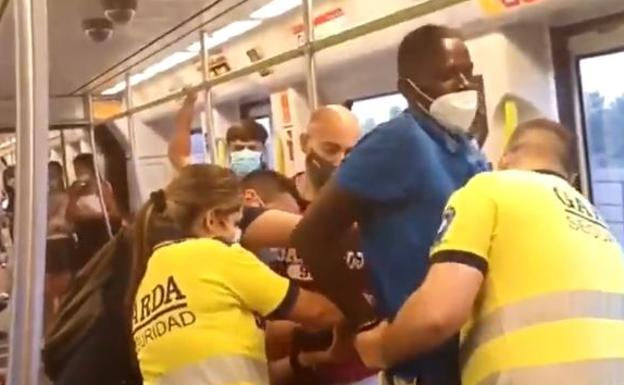 A fight broke out yesterday on the metro after a passenger bluntly refused to put a mask on even when all the other passengers were wearing theirs.
The man, reportedly a Nigerian immigrant, of approximately 30 years of age, shrugged his shoulders when asked by other passengers on the packed train to don his mask. After repeated requests, someone pressed the alarm button and an inspector was quickly on the scene.
This is when it all kicked off, for no apparent reason the man lashed out at the inspector and reacted violently to the request,  the situation worsened as other male passengers on the train tried to help out.
Commuters looked on in disbelief as the group banged against the sides of the train as it navigated swiftly towards the next stop, many thought there must have been more to it and even theorised it could be terror-related!
As it pulled into its next stop police jumped onto the train and quickly had the by-now exhausted man in handcuffs. People clapped with joy as they led him away, he stared blankly at the other passengers as was escorted to a waiting police van. He was later fined and given a stern warning by police, remember, a mask is compulsory on all transport in Spain!