The high court in London heard that Johhny Depp branded his ex Amber Heard a “go-getting s**t” who liked “getting f***ed” by her “rapey” co-star James Franco after the pair were involved in a furious plane bust-up.

The court then heard that the actor allegedly hurled ice cubes at his wife during the row and kicked a chair so hard it swivelled around and hit her. The Pirates of the Caribbean star also claims ex-wife Amber Heard had built up these ‘hoax allegations’ as ‘insurance policy’. 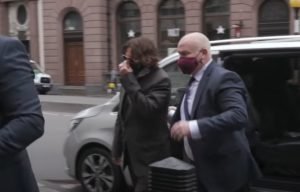 The case bought by the Hollywood actor, 57, is suing The Sun’s publisher, News Group Newspapers (NGN), and its executive editor, Dan Wootton, over a 2018 article which labelled him a “wife-beater” and referred to “overwhelming evidence” that he attacked Heard, 34, during their relationship – which he strenuously denies.

Heard’s email, read by NGN’s lawyer Sasha Wass QC, began: “I just don’t know if I can do this anymore. It is like Dr Jekyll and Mr Hyde. Half of you I love madly, and the other half scares me. I can’t take him. I wish I could, but I can’t. During his second day on the witness stand, Depp faced further questioning on his drug use, allegations of violence, his relationship with Heard and accusations of jealousy.


The judge, Mr Justice Nicol, says the questioning of Depp must conclude by Friday lunchtime, by then that will be Depp’s fifth day of questioning in the witness box.