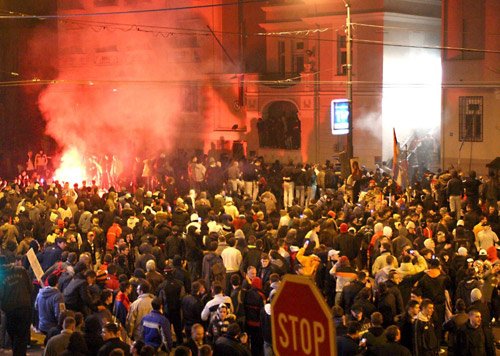 Thousands of protesters clashed with riot police last night in the Serbian capital Belgrade after the country’s president announced the reintroduction of a lockdown following a spike in coronavirus cases.

SERBIAN police fired tear gas at demonstrators as thousands took to the streets to protest at fresh lockdown measures introduced by the government. Opponents blame the increase on the government and say people should not have to pay the price for another lockdown. Video from YouTube.

Serbia went from one of the strictest lockdowns in Europe to a near-complete reopening of the country at the beginning of May, this has now been reversed as the capital has experienced a serious upsurge in new cases over the last week.

Social distancing was largely ignored as football and tennis matches were played in packed stadiums and parliamentary elections were held despite warnings that the mass gatherings could lead to a new and more serious coronavirus wave. President Aleksandar Vucic said lockdown measures had to be reintroduced after the Balkan country reported its highest single-day death toll from coronavirus, there were chants of ‘Resignation! Resignation!’ as crowds gathered in front of the central parliament building, some managed to enter the building by force but were pushed back by riot police.

Serbia, a country of seven million people, has reported 16,168 coronavirus infections and 330 deaths. But the numbers are spiking and 299 cases and 13 deaths were reported just on Tuesday. Epidemiologists and doctors warned that hospitals were running at full capacity and that medical workers were tired.