IN collaboration with Bilba, Wilma Sierra Blanca has started the construction of The View Marbella with an industrialised system that reduces completion times by up to 25 per cent

Marbella, June 23rd.- Construction 4.0 is the use of new construction systems that are believed to improve the building processes, in terms of quality, sustainability and speed. These systems have found a place in the luxury real estate sector of the Costa del Sol, in The View Marbella, a promotion of 49 prime apartments that will be built with an industrialized system capable of reducing completion times by 25 per cent, whilst improving the quality of the properties being built.

The current circumstances, in the midst of the Covid-19 crisis, has not stopped this project. In fact, the construction contract between the two companies was signed at the beginning of the state of alarm and construction began during the confinement period. The symbolic start of the project took place this morning in an inaugural act in which the ‘first stone’ was laid by the Mayor of Benahavís, José Antonio Mena, together with those representing the developer Wilma Sierra Blanca and the construction company Bilba, who will carry out the construction of the first phase of the development.

The works of this ambitious promotion of luxury apartments will be carried out quickly, thanks to construction 4.0. “A positive aspect of working with industrialized systems is that they facilitate better planning while simplifying on-site processes and allowing the optimization of times, thanks to the overlapping of productive tasks on-site and at the factory simultaneously,” says Juan Borrajo, CEO of Bilba, who recalls that in recent years they have delivered more than 300 industrialised homes.

The use of Sismo Building Technology, the chosen industrialized system for the project, will also substantially improve the quality of the apartments, as well as the energy efficiency of the homes, which count with A-rated energy certificates. The continuous layer of external insulation and the reduction of thermal bridges have been key to achieving this certification.


Architectural design for the “new normal”

The health crisis caused by coronavirus has confirmed the need to rethink real estate projects, in order to guarantee the greatest peace of mind and comfort for homeowners. These new trends seem to be in line with Wilma Sierra Blanca’s own philosophy, for whom space is luxury. Therefore, it is not difficult to find in The View Marbella many of the guidelines that will set the standard in post-COVID architecture. In this sense, its managing partner, Pedro Antonio Rodríguez, states that “The View is a project that pioneers many of the issues that will define the future in the construction of residential buildings”.

An example of this can be seen in many areas such as the walkways to the apartments, the stairs and the communication cores, having been designed with ample space, and having not been completely closed, thus favouring natural ventilation. In addition, the initial design of the property already included that the access to each of the homes was independent, increasing privacy as well as distance between its inhabitants.

The project also cares for the latest safety concerns within common areas, such as the spa and gym. The amplitude with which they were designed – with distances of more than 2 meters between each exercise machine, for example- is joined by the ozone filters that will be installed in each of the rooms. The elevators have cutting edge technology, replacing the typical keypad with a sensor system, and the access doors to all community areas will open and close automatically, in order to reduce contact with surfaces. 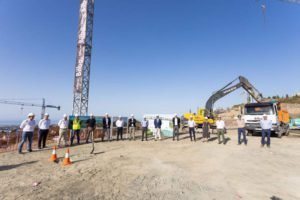 The interior design of each apartment is another of its core attributes, coinciding with the new demands of the real estate market. “The amplitude of space, with apartments of up to 285 m2 closed built on one floor, abundant natural light, large terraces and with all the modern comforts inside the home, allowing you to live connected to the outside and enjoy the outdoors without leaving your home”, Rodríguez points out, agreeing with the college of architects that the pandemic has brought a new way of seeing life, where we have rediscovered our homes. In fact, the design and composition of each apartment with generously sized rooms and spaces throughout offer flexibility for a multitude of uses, from working from home, play areas for children or exercising within your home. These are precisely some of the features most valued by the clients of The View Marbella, which also offers spectacular panoramic views of the Golf Valley and the Malaga coast that extends to the Strait of Gibraltar.

Bilba is a family-owned construction company committed to excellence. Founded in 2002 and of Malaga origin, the company operates nationwide through a business model based on the hiring of personnel and its own resources, which allows it to offer its clients the possibility of guaranteeing demanding deadlines without giving up on quality.

Bilba has a staff of more than 450 workers specialized in the different construction trades, which gives it a high production capacity to carry out projects of any dimension and architectural category throughout Spain. The company integrates different lines of activity such as building, rehabilitation, retail or Civil works.