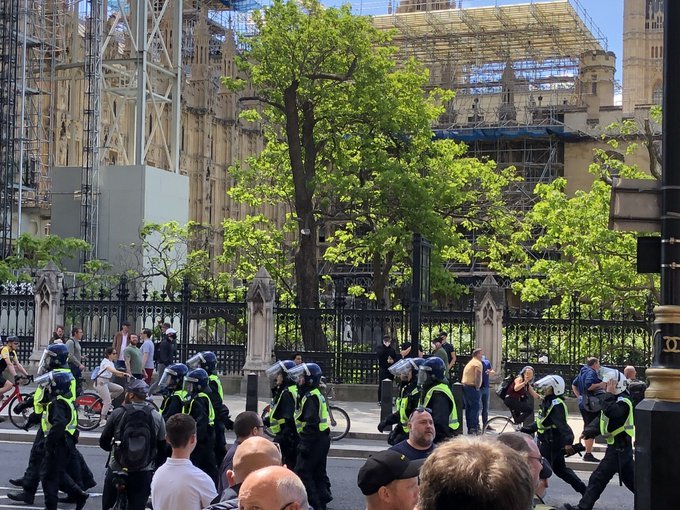 London has been bracing itself for chaos today as protestors from both BLM and far-right groups descend on the capital.

Riot police armed with batons and mounted officers are attempting to hold a line in the middle of Westminster to keep the BLM demonstration apart from fierce counter-protesters.

Crowds of pro-statue campaigners have swarmed around the monument of Winston Churchill that was defaced when BLM protests became violent last weekend.

Mayor of London Sadiq Khan took steps yesterday to protect London’s monuments, having them boarded up across the capital. He also issued a statement to Londoners to “stay at home” rather than risk getting involved in any flare-ups between protesters.

The pro-statue rally included British war veterans dressed in military uniforms who feel they are being dis-respected by recent vandalism of statues across the country.


Far-right extremists were also gathered in Westminster in full support of the pro-statue rally. However, many fear protests will become violent as has happened before with far-right clashes with ant-racism movements.

This morning, a senior BLM organiser said that Winston Churchill’s statue should be removed completely from Parliament Square.


There is a considerable amount of resistance to this suggestion from British citizens as Churchill was the man who led the nation to victory against the Nazis.

On that basis, many feel BLM does not have an argument to support the statue’s removal.