the art of publishing
More
Home News “Off the Streets by 5pm”: British Police Impose New Rules on Protesters 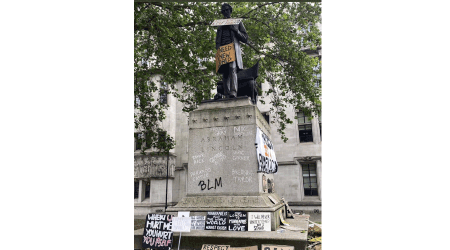 London’s Metropolitan Police have issued warnings to BLM protesters that they must be off the streets by 5pm today.

The police are taking the precaution in an attempt to prevent any protests from becoming violent and disorderly, as they did last weekend.

Historic monuments and statues around the capital have been boarded up to protect them against further vandalism from BLM protesters.

The Met is also asking protesters to keep to a planned route, which runs from Hyde Park to Whitehall.

A police barrier has been put up at Whitehall, where mounted police were ‘charged’ by protesters throwing flares in last Saturday’s protests.


Protesters will be asked to stay on one side of the barrier, with any counter-protesters on the other.

Far-right-wing groups are also expected in the capital this afternoon, where they are expected to clash with the BLM movement.


Met Police chief Bas Javid said that he understood the depth of feeling of BLM protesters but requested them not to come to London while lockdown rules are still in force.

The 5pm curfew for protesters on London’s streets today have been set under section 12 of the Public Order Act.

The UK’s National Police Chiefs’ Council said on Friday that more than 130 people have been arrested during almost 200 demonstrations across Britain since the death of Mr Floyd.

More than 60 police officers have also been injured.