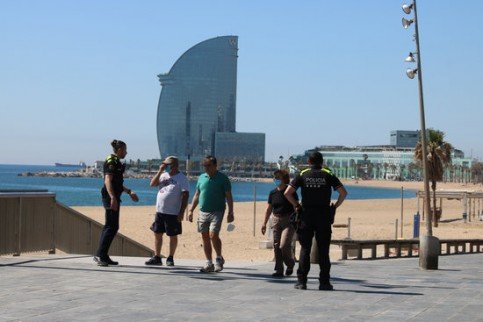 POLICE were out in force last night trying to stop the flood of people onto beaches in Barcelona, so much so that the local authority may have to halt access temporarily.

Barcelona’s local government has said it will consider taking “a step back” in terms of opening beaches if the crowds seen on Wednesday, the first day walks on the sand were allowed to continue.

Eloi Badia, the local Climate Emergency councillor, suggested on Wednesday evening restrictions could be once tightened again: “If we see that the desire to enjoy the beach, which is in our Mediterranean DNA, is stronger than the regulations, we will have to take a step back.

“In general, the people of Barcelona quickly understand rules, and we are sure we will be able to revert this situation,” he said concerning the crowds seen the first day beaches were opened during the 6am to 10am time slot, which is for people aged 14-70.

It is understood that the busiest seafronts were the Sant Miquel, Sant Sebastià and Barceloneta beaches, where, according to Badia, at times it was hard to maintain the safety distance. A top epidemiologist for Catalonia, Antoni Trilla, expressed concern about some images of the first day at beaches on the Catalunya Ràdio station: “This cannot go on by any means.”

He said there were “crowds” and people “not respecting rules” and that this could lead to new Covid-19 transmissions.