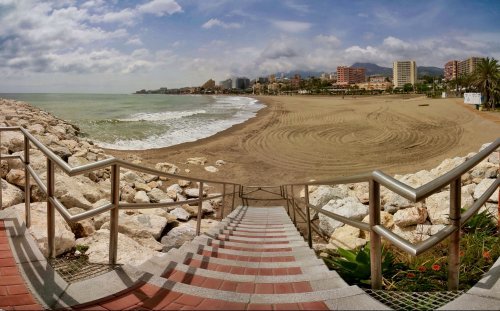 The mayor of Benalmadena, Víctor Navas, and the counclilor for Beaches, Encarnación Cortés, held an online meeting with an array of representatives of beach businesses in the municipality.

THE president of the Malaga Beach Businessmen’s Association, Manuel Villafaina, also participated in the meeting. “As a government team we are committed to constant communication with the most representative groups of Benalmadena’s business network, such as the business owners on the beach, as this is the way to feel the social pulse and learn first-hand about the concerns that citizens have,” said the mayor.

During the meeting the mayor and the councillor informed the businessmen about the planned lines of action that the local administration has regarding beaches and the possible repercussions of the health crisis during the summer season.

Navas has assured that the “sector is already negotiating” taxes and fees with on a “national level directly with the Ministry of Ecological Transition”. The mayor has also guaranteed that any businessmen who decide to not reactivate their business this year will not lose “any of his rights regarding the plot” of beach.

“This meeting was convened to inform businessmen in the sector about the news related to beach management this season, and for them to convey any concerns about how they will deal with the necessary preparations for the start of the season,” explained Encarnación Cortés, the councillor for Beaches.

“At the moment we hardly have a draft of the recommendations made by the Andalucian Government: we do not yet have a clear opening date for the beaches, even if this date is possibly in June, nor do we know the the final capacity they will allow, nor what firm measures will be employed to face the beach contingency plan we are already working on,” Cortés detailed.


The mayor has been unafraid to express his concern about the impact of the Covid-19 crisis “on a sector which traditionally relies on up to 80 per cent of its clientele from the international market.”

The meeting also addressed some of the recommendations made by the Board, such as the prohibition of the use of sun-bed mats “as these could be vehicles for transmission of the virus.” Faced with this predicament, employers are considering alternatives such as the use of disposable covers that can be used as an extra protective later against the risk of contagion.


“We have also stressed the importance of safety distances: in the Board’s recommendations, they highlight a distance of five metres between parasol and parasol,” he pointed out.

The councillor has announced that they will hold a new meeting with the beach businessmen “after learning about the news and final measures proposed by the Board so that they can face the preparations for the season together” and support each other during this time.