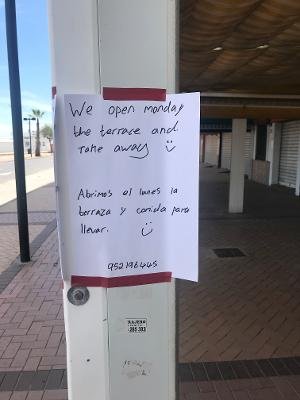 Whilst notices start to appear on bar fronts along the Costa del Sol bar owners are asking do we or don’t we?

BAR and restaurant owners are scratching their heads in puzzlement as they consider whether to open or not as notices are starting to appear on some bars along sea fronts.

Many are still in doubt as if they can or can’t open as they haven’t heard anything officially and wonder if other bars are actually thinking of opening on presumptions.

One of the other questions is, is it worth opening as lockdown restrictions are still in place and that the public can only go out at certain times for exercise, especially where terraces are concerned.

One bar owner who didn’t want to be named today told the Euro Weekly News of his personal dilemma:

“I’m not really sure about it all, I’ve read matters in all the press but as business owners we haven’t actually had anything official in documentation, also as it’s reported we will only be allowed 50 per cent capacity combined with the fact that the mass majority are only allowed out for exercise at present, where we stand with terraces, takeaway I fully get but is sitting on a terrace going to be affected by the exercise only ruling, in the evenings for example I’m seeing people being moved on by the police for sitting on benches and walls. Is there going to be a different standpoint when it comes to terraces etc? That’s why I’m in a bit of a dither, no doubt we will hopefully hear something soon but at present quite a few of us are scratching our heads!”