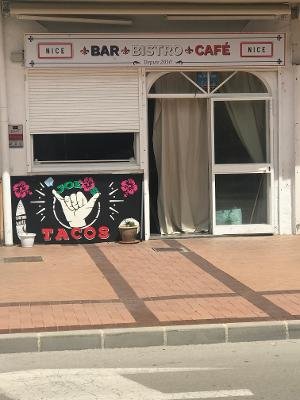 WHILST the bar and restaurant market has been decimated on Spain’s Costa del Sol with over eight weeks closed and no takings and soon to hopefully reopen on limited capacity of 50 per cent, when they get the nod from the authorities others are taking full advantage of opportunities as some bars fall to the wayside, speculators seize the opportunities.

Bars and restaurants less established and without good cash reserves are collapsing and handing back in keys to premises missing out on ‘goodwill payments’ from potential new buyers whilst landlords are just pleased to shift defunct empty bars.

One of those taking full advantage is Joe from Joe’s Tacos who is currently refurbishing the ‘Nice bar’ in Torreblanca close to Fuengirola.

Joe who is well-known for his cheap beers and delicious tacos has taken the opportunity to slot into next door of the popular Brad’s bar after a former bar owner’s business collapsed.

The Nice Bar, first went on the market for €40,000 asking price, which gradually slid down to €15,000 then €5,000, but eventually the previous owner ran out of cash, handed in the keys to the landlord and went to work as a chef in Sweden, thus presenting the opportunity for Joe to seize the initiative and move in for the kill, the landlord gets his rent, Joe gets a deal and the only person who misses out is the former owner.


Business analyst and speculator who lives in the area, Simon Dewsberry told the Euro Weekly News how he thought the market will change, the advantages for speculators and how he feels current bar owners are asking too much for their businesses:

“It’s a buyers market and in my opinion bar owners are expecting too much in their asking prices, yes in normal circumstances, there is good money and profits to be made from running a bar or restaurant in Spain, but only when the conditions are right. I’m studying the market right now and waiting further for prices to come down or even better for speculators like myself to wait for a business to crash, that may sound harsh but it’s just business. Why pay when you don’t have to? Doesn’t make any business sense at all.

“Bar owners struggling need to realise and smell the coffee that trade is going to be tough for the next couple of years at least and that has to reflect in the asking price, you can’t base it on the past trade, something is only worth what someone’s prepared to pay and us speculators work to that theory,” Simon said

“Joe got a good deal there, sharp move, I had my eye on that myself but he beat me to that one, fair play to him but he was already dealing with the landlord in his previous establishment.

“Those are the deals we are looking for right now – more will come as owners ask too much in price, don’t get a sale and run out of cash, the signs are obvious, the price starts at a stupid price, then slides, once it goes on the slide that’s the time to make your move.

“Bar owners need to apply common sense if they want out of the industry and some cash back because if they don’t they will be left with nothing at all, it’s not the time to be greedy,” Dewsberry finalised with.