A spike of complaints have been reported by furious Brits at mechanics, plumbers, and electricians across the region who blame the coronavirus crisis for their ‘extortionate’ prices.

I WAS shocked by the number of emails I’ve been receiving just lately concerning ‘rip-off’ tradesmen and I thought it was about time I let you, our loyal EWN readers, be aware so you don’t get ‘scammed in the same way.’

Roger, an expat from Fuengirola gets ‘battery-battered‘ by a local mechanic

The story starts with an elderly couple in La Noria, Fuengirola, Malaga and her husband, Roger, 76, couldn’t start his car so looked on the internet for mobile mechanics and managed to find someone to pop down to him.

The guy turned up eventually and took about 10 minutes to diagnose that the battery had failed. He told Roger that he didn’t have that type in stock and needed to go to a local supplier to pick one up and would be back in a few hours.

He returned with a new battery, connected it and the car burst into life, as it was running, a bill was prepared and handed to Roger who nearly passed out! A total of €175 later Roger waved goodbye to the mechanic, who was happily coasting off into the distance by this time. Roger, who has bad eyesight took the bill into his wife and it was she that noticed there was no breakdown of the price, it just read ‘Battery’!


After a heated phone call, the mechanic explained that he had to charge more due to the coronavirus crisis, but would not elaborate any more and put the phone down on Roger, nice!

“The last time I had it replaced was about three years ago, they charged me €80, have prices gone up that much?” said Roger…

Over to the Costa Blanca and to Maureen Jenkins, a retired school teacher who lives alone in a self-owned apartment close to the beach and had no hot water for days, so decided to look on the internet for a plumber.

“I thought I would use someone local as it would be quicker and as expensive as a large plumbing company out of town.” A local Spanish man turned up the next day, we shall call him Jose for the purpose of the article as Maureen is waiting to see a lawyer and press charges.

“It’s your heater element he said, but I can’t get one quickly, be easier to replace the whole heater and they are not expensive,” he said. Maureen agreed to pay €350 for the heater and fitting, a stretch for her but she was desperate for a shower and needed to do a month’s worth of washing.

After almost two days of banging (and swearing) Jose called her in to observe his handy work. Take a look at the picture below and tell me what you think. It goes without saying she refused to use the ‘contraption,’ eventually using a neighbour’s shower and called a lawyer to get her money back. The case continues… 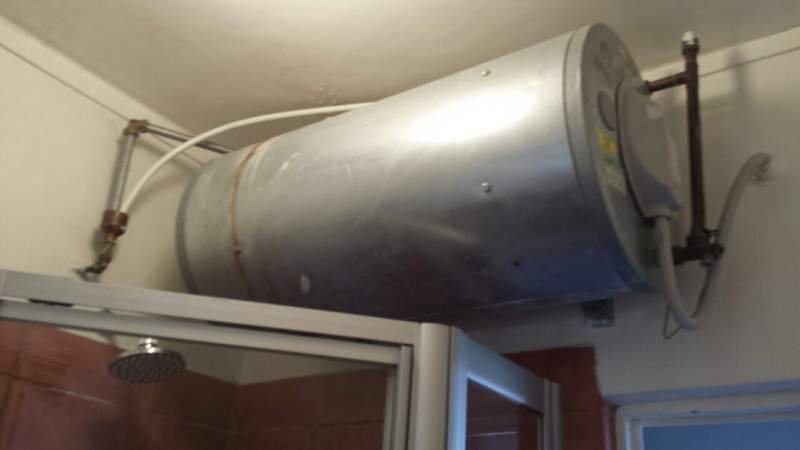 The ‘new heater’ fitted by ‘Jose’ looks about 10 years old.

Maria Munoz from Benidorm wrote in to ask if I would print her story and I agreed. When I saw the picture of her ‘shower installation’ I immediately called her and told NOT to use it at any cost. Maria worked at a local travel agent but has not been in the office for about two months as Benidorm and the travel industry, in general, has ground to a halt.

When her old shower unit, a gas-powered one, stopped working, she like the others trawled the net looking for an electrician that could call quickly and not be expensive.

‘George’ as we shall call him, was at the apartment like a shot and after making a few calls he told Maria a new electric heater would be better for her, and by sheer coincidence, he had one in his van that someone had ordered and then cancelled.

Maria agreed to pay €450 as a ‘good price’ and within about two hours the job was done. “George switched on the unit and hot water came streaming out.” Maria took a double-take at the LIVE socket next to the heater and asked him if it was safe, you know, water-electricity, etc.

He assured it was and got paid, explaining that because of the ‘bad virus’ he had to charge a little more… he collected his tools and left. She later realised he hadn’t left the booklet for the heater and tried to contact him but his mobile always went to answer.

It was when she showed her neighbour, a retired electrician, that she suddenly was made aware of the danger, it was a ‘death trap-you cannot use it,’ she was told.

Suffice to say that Maria made a denuncia the next day and her lawyer advised her not to use the unit at any cost. He (the lawyer) came to take pictures for the court and a local firm of electricians had to redo the complete installation to make it safe.

I cannot emphasise this enough:

Always use a reputable and reliable tradesman as advertised in the Euro Weekly News!!

PS. I am always interested to hear from readers, if you or anyone you know has a similar story please email the EWN, you could save someone’s life…

Spain suffers the highest number of cases in Europe