The police on Spain’s Costa del Sol are targeting cyclists this morning due to their lack of ability to ride a bike and the lack of awareness as some residents call for cycling to be at a different time.

As the second morning of exercise hours started for the majority, scenes more accustomed to the Tour De France took place as cyclists in the sea fronts in mass numbers and by 8.30am emergency services had already attended seven different incidents alone in Fuengirola.

Some incidents were for people simply falling off their bike and injuring themselves, leaving one man with a broken shoulder, but other instances for cyclists injuring walkers simply out for exercise and this has been deemed not acceptable by the Spanish police.

Despite the council last week clearly marking the road to direct cyclists in preparation for the lockdown release, cyclists continued to ride on the walkways dodging and weaving around walkers and runners.

After several incidents and complaints from residents and reports coming from through from the emergency services the police reacted and set up points to warn cyclists of their behaviour.

Officers stood in the road and stopped cyclists giving warnings whilst others took to the paseo and ordering cyclists on to the road.


One resident who complained to the police was William Sharrock from Los Pacos who told the Euro Weekly News of his unpleasant experience with cyclists:

“This morning as I walked the paseo I have had my elbows clipped twice by bike handles and my calf muscles on the back of legs struck three times by cycle wheels, it’s madness out here and the cyclists don’t give a hoot, so I went to the police patrol parked up and complained, the officer told me it was becoming a serious issue and that they were about to react.” 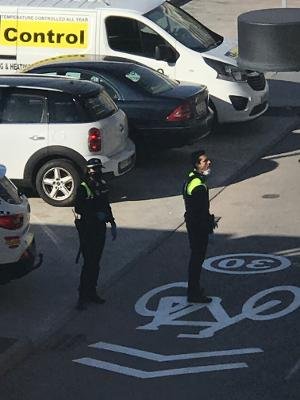 Divina O’Leary was another victim this morning as she told how cyclists nearly run her over as she crossed a zebra crossing with her dog Patch:

“They just don’t stop at crossings, they either just carry on as if you shouldn’t be on the crossing or they just weave around you, I’m sure like every other road user they are supposed to stop if someone is on the crossing, just like a car, they never do though, it’s very dangerous indeed, these bikes are not going slow.”

More police were drafted in to try and contain the situation.

We spoke to a cyclist who got stopped at one of the cycle patrol points, David Carte who told us “The officer warned me that no riding on the pavement was allowed even though I hadn’t and she also told me to watch my speed and to stop at crossings, she said from tomorrow they are going to set up a campaign to monitor cyclists more and will be taking a no-nonsense approach.”

The officer then spoke to us and said “it’s becoming an issue, quite a serious issue, some of the cyclists’ behaviour is atrocious and after many complaints today we will start taking further action shortly, today we made warnings, tonight and tomorrow will be a different scenario.”

Hilary Jenkins, a Los Boliches resident called for cyclists to be out at a different time:

“They need to change the timetable, there’s too many cyclists out with walkers and as seen today they can’t be trusted to behave themselves.”