Police swamp in at 10.05am this morning and start making arrests and issuing fines to residents on Spain’s Costa del Sol who can’t tell the time and flout the regulations.

There’s no tolerance from the police this morning on the Costa del Sol coast as at 10am the police helicopter was deployed as well as police vans and beach bikes who started issuing fines and also making an arrest with an argumentative walker out after the morning deadline.

“Look at them, give them and inch and they take a mile,” shouted eye witness Mike Harris as the police moved in to fine flouters who remained out after 10am.

As flouters who clearly had no watches and must have been deaf not to hear the police megaphone announcements were stopped and fined by both police officers and civil protection officers for disobeying the strict regulations that state only until 10am.

Walkers and runners were soon on their toes as they witnessed fines being handed out as police also asked for ID and hot footed it to avoid being rounded up.

Eyewitness Mike Harris said how he saw one arrest as a flouter got argumentative “A man was pointing at his watch and shouting at the National Police officer, it was clearly past 10 o’clock – the officer wasn’t having it as the man waved his arms around and before you knew it he was cuffed and in the back of the police van, I can’t believe what I have just witnessed, they have had since 6am to go out for an hour and they still miss the deadline.”

At the time of press the helicopter is still in the air and police checks are taking place as many don’t look 70 years old and the police bike riders are checking ages. 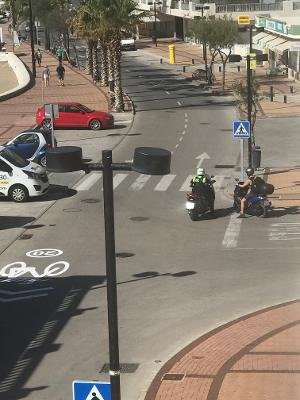 It was a harsh lesson for many today as they were hit in the pocket for ignoring the times as well as being out for over an hour, going surfing!