The Andalucian Government is considering spraying the sand with a disinfectant in a bid to lure back holidaymakers to Spain’s Costa del Sol and Costa Blanca’s beaches.

SPAIN’S Costa del Sol and Costa Blanca’s beaches look set to be blasted by a strong disinfectant as children and holidaymakers are in danger of spreading a Covid-19 infection with their feet.

A beach in Cadiz was one of the ones to test for its effectiveness against the virus but already the major is trouble as apparently local bird life was harmed by the chemicals, similar stories have emerged recently on the streets of the Costa del Sol when owners reported some domestic pets had severe burns on their feet after venturing out once the streets had been cleaned with disinfectant.


One thousand litres of water with a 2 per cent bleach solution. That is the disinfectant that Zahara de Los Atunes (Barbate, Cádiz) spread over more than two kilometres of beach last Saturday. The local authority intended to clean its coast for the children who used it, the next day, on their first outing during confinement due to the coronavirus crisis, but the occurrence can be expensive.

The Provincial Delegation of Sustainable Development of the Junta de Andalucia studied a possible sanction, while the president of the region, Agustín Conejo, has already admitted his mistake and says he will pay the fine if it materialises.


“I admit that it was a mistake, it was done with the best intention,” he explains. It was last Saturday when the autonomous local entity and the local association of merchants ACOZA decided to allocate the disinfectant that was left in the three tractors that had passed through the streets of the town to spray the sand on their beach.

Despite the fact that it is a natural open space, which has been closed to the public since the start of the State of Alarm and that they did not have permission from the city of Barbate – responsible for the beaches of Zahara – Conejo took this measure in preparation for cleaning the coast ‘for the children.’

The tractors went ahead and sprayed a solution of a thousand litres of water for 20 of bleach, as confirmed by the president. “It is an environmental aberration,” said Daniel Sánchez Román, delegate in Cádiz for Sustainable Development.

Upon learning what was happening on the Zahara coast through videos and notices from neighbours, Sánchez sent an environmental agent to the area who recorded everything that had happened. The presence of the tractors without permission and the solution that was sprayed “could have consequences for the local birds,” according to the delegate. 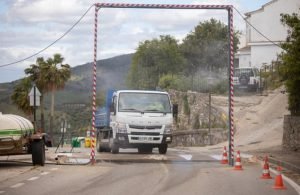 Zahara de Los Atunes, with its 1,300 residents, is one of the towns that have tried to shield itself due to the coronavirus crisis. They sprayed the streets of the town with disinfectant and installed a fumigation arch for entering cars.

Until now, it has not had any positive case for coronavirus, according to its president. “We have been fighting this for 60 days, these are days of great tension and it has been a mistake,” Sánchez understands and accepts the apology, but warns him: “I know it was without intention, but with these things, you have to be careful.”

Ben Affleck and Ana de Armas Split After 1 Year Together