Police tapes are removed during the night from Fuengirola’s beach entrances although it’s left residents confused.

CAN we? Can’t we? Is the question being asked this morning in Fuengirola on the Costa del Sol as the police tapes have been removed and the beaches have tractors and sand levellers in plenty smoothing out the beaches.

The only tapes left up at present are on the kiddies play frames as the beach workers ply their trade smoothing over the sands, but it has left some confusion amongst residents. 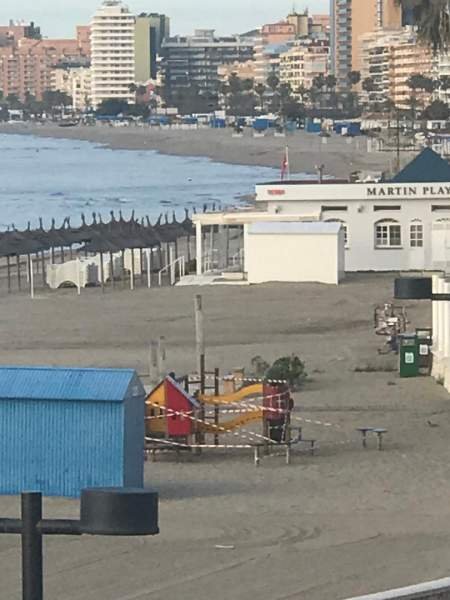 William Emery, one early riser with his dog Charlie seemed baffled as he told the Euro Weekly News:

“I’ve seen that other beaches are open from today for walking with kids and stuff but haven’t seen anything around these parts, all the tapes gone from the entrances and it was there at 2am this morning, I think they are still closed, so I’m not going to risk it although Charlie loves the beach, we normally walk the full length up to the port each day under normal circumstances, but I’ll wait I think to I see or hear something official.”

Jillian Gregson found it very exciting “Isn’t this exciting, it’s a significant sign of normality returning, I don’t think we can go back on yet as the red flags are still flying this morning but that could just mean no swimming? – if I see a policeman I will ask before going on, I think that’s the safest option, up the front people are a bit confused whether we can or can’t but I am sure we will find out shortly, the best thing is though it’s making people smile again.”

UK gets set to search for signs of life on Mars

UK
The UK gets set to search for signs of life on Mars with the Rosalind Franklin Mars rover.The rover from the European Space Agency...