A COSTA BLANCA animal hotel which takes in pets belonging to frontline workers fighting the Covid-19 virus, free of charge, is now offering its services to victims of domestic violence who are forced to leave their homes during lockdown.

Hotel Canino y Felino El Rey de la Casa in El Campello has been looking after dogs and cats while their owners are carrying out vital work since the beginning of the pandemic, and has now extended its services to others in need. 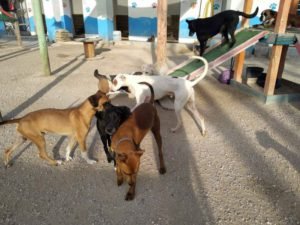 The Department of Women and Equality has today announced that victims of gender violence who are forced to leave their homes during confinement will also have somewhere for their pets to stay.

The move comes after the department became aware that some women in situations of abuse find that, among the many fears and insecurities they face when leaving their homes, is not knowing where to leave their pets.


The initiative, which is already being carried out successfully in different parts of the country, is reliant on the altruistic support and collaboration of staff at El Rey de la Casa who make sure pets are well cared for during the health crisis.

“This altruistic collaboration of the animal hotel in El Campello adds to its invaluable commitment to solidarity by making its facilities available to pets of health personnel, Local Police officers, Guardia Civil and Civil Protection volunteers since the State of Alarm was decreed,” said a council spokesperson.


The Department of Women and Equality will be making all the necessary arrangements.

966,097 Covid-19 vaccines have been administered so far in Spain

Robbie Williams in Isolation After Testing Positive for Coronavirus