FARMS in Almeria Spain produce much of Europe’s vegetables, UK consumers would be shocked to know how the farm workers are treated.

Tomatoes, cucumbers, and lettuces are just a few of the vegetables grown there, in fact, there are so many greenhouses there that they can be seen from space!

The vast majority of workers are migrants from Africa and they live in run-down shacks joined onto the greenhouses. With no documents and no records of their existence they form part of the Spanish ‘hidden’ economy, they have no rights, they are basically living as slaves. 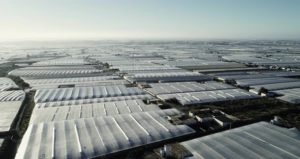 They work in greenhouses, often in temperatures of 50 degrees Celsius in summer, it’s a common occurrence for workers to pass out through lack of hydration. Friends help them up and give them a sip of water, scared of being caught by the farmer, they just carry on until their non-stop eight-hour shift is over.

The vegetables they collect and help produce are supplied to many of the UK’s supermarkets, it is not known if they are aware of the conditions the workers live and work in. It is understood this matter has now been brought to the attention of a UK news team.


Camera teams from a major UK broadcaster were reportedly spotted there recently apparently gathering evidence for a ‘fly on the wall’ documentary, all will be revealed soon…