the art of publishing
More
Home News Costa del Sol The Spanish Government will distribute 1.87 million masks in Andalucia over the...

THE Spanish government will distribute 1.87 million masks in Andalucia over the next few days to those returning to work amid the Coronavirus pandemic.

The Spanish government has delivered to Malaga 372,000 masks that will begin to be distributed today (Monday) among the workers who are returning to their jobs.
In total, in Andalucia, the government will distribute 1.87 million masks, as part of the measures with regards to safety during the strict limitation of movements in force.
The use of masks is recommended for those workers who cannot work from home or travel in a private vehicle, bicycle or on foot and who have to use public transport.
The 10 million masks, acquired and managed by the government of Spain, arrived on Friday night for distribution throughout the country.
In this shipment, the Government Delegation has received 1,878,000 masks, of which 434,000 have arrived at Sevilla, 372,000 masks to Malaga, 276,000 to Cádiz, 204,000 masks to Granada, 174,000 to Córdoba, 160,000 to Almería, 142,000 have arrived at Jaén, and finally, 116,000 masks have been received in the Huelva. 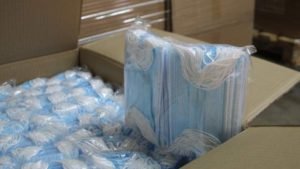 Over the next two days, the Local Groups of Protección Civil Volunteers together with the Fuerzas y Cuerpos de Seguridad del Estado and Local Police will hand them out to those who are commuting to work when it is not possible to maintain a distance of two metres from other people.


If the trips are made by private vehicle, motorcycle or on foot, they are not necessary.
Priority has been given to the points with the highest influx of people in public transport such as railways, subways and inter-urban road transport and the urban bus network.
The delivery began at 6am on Monday with a single mask given to each person.
According to the estimates submitted by the Andalucian government, it is expected that 50,000 commuters could use metropolitan transport and the autonomously owned metro network daily this week, while, for the Renfe suburban, medium distance and Avant stations, about 6,500 travellers are expected each day.