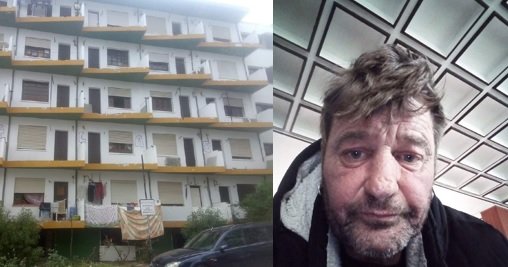 WE NEED YOUR HELP NOW! Brit Steve Matthews sends out an urgent plea for food as he ends up holed up in the abandoned Hotel Goya, Benalmadena with a mix of multinational children and adults.

Problems with his brother-in-law lead him to quickly leave his apartment in Puerto Banus a few days ago. Using the few euros he had left he managed to find his way to the hotel after being advised by friends that he could stay there as a last resort. He was not expecting what he saw, as he carefully made his way through the entrance of the squalid building he came across an awful sorry sight.

Steve explained there is no gas/electricity or water which of course is expected, after all, the hotel was closed four years ago. It’s full of damp, freezing cold at night and has been smashed up by gypsies who stole most of the fixtures and fittings.

The other 26 that are ‘holed’ up consist of shop workers and restaurant/bar staff that were literally told to go by their employers after the lockdown was introduced weeks ago, they have now run out of everything. There are Spanish nationals, Polish people and even a Moroccan family, including a grandmother, all marooned with nowhere to go.


Steve said that he has called everyone he knows but so far has received no replies whatsoever, even the local priest had to admit that he doesn’t know what to do, the police drive past often but do not offer any help at all.

Here is the actual message Steve has posted on his Facebook page, please take the time to read it, it is upsetting i know but surely someone somewhere can do something to help these poor people?

Good morning everyone. Due to unfortunate domestic problems I had to leave the apartment I was staying in in Puerto Banus and moved to an abandoned hotel in Benalmadena. I found 26 people living there including old folk and young families. They have no means of support and are not allowed out to go begging or otherwise. Does anybody please know who we can contact. Ie a food bank or something to help these people. The police are aware of the situation but have done nothing. I have tried to contact Centro bethel and Remar, the Red Cross and the local welfare office. No answer…
Can anyone please advise.
Thanks
Steve.

I have Steve’s permission to hand out his number so please call him if you can help in any way. Thank You.