Radomir had ended his playing career at Luton where he scored the famous goal that led to manager David Pleat running across the pitch in celebration.

THE Serbian was one of the most illustrious coaches in La Liga and the only one to have directed Atlético, Real Madrid and Barcelona; the three great teams of Spanish football. The former trainer had been admitted for more than two months, having also been in the ICU, but his death is not related to the coronavirus.

Radomir enjoyed most of his success at the latter, guiding Atleti to a La Liga and Copa del Rey double during the 1995-96 season, he had three separate spells in charge at the club and was one of only two people to coach El Clasico rivals Real and Barca during their career, after Enrique Fernandez Viola. 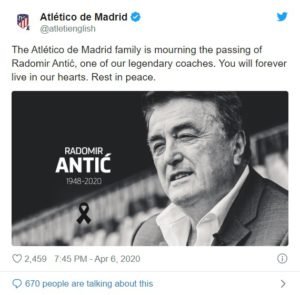 A statement from Atletico’s official Twitter account read: “The Atletico de Madrid family is mourning the passing of Radomir Antic, one of our legendary coaches.


“You will forever live in our hearts. Rest in peace.”

Antic, who had one cap for Yugoslavia, spent the final four years of his playing career at Luton. He scored a famous goal in 1983 that secured a 1-0 win at Manchester City to keep the Hatters in the top flight and lead to manager David Pleat memorably running a jig across the Maine Road pitch in celebration. 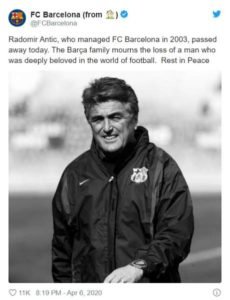 Luton tweeted: “We are devastated to learn of the passing of Town legend Radomir Antic, at the age of 71.

“A true Hatters hero, for promotion and preventing relegation. The thoughts of all at Kenilworth Road are with his family and friends at this terribly sad time. Rest in peace, Raddy.”