EVERY night in Calle Nardos, Los Pacos, Fuengirola, the residents come to their front doors to applaud all of the essential services who continue to work during this State of Alarm.

Whilst observing the lockdown, the 8pm event is bringing the residents together as Martyn Wood of Big M Promotions (which until recently regularly organised concerts across the Costa del Sol) has a very loud PA system and each night he plays music requested by neighbours through their WhatsApp group.

The area in which he lives is full of people of different nationalities and so far he has played songs by artists from Spain, Scotland, Finland, UK, USA and South America.

Yesterday however was a very special night as all of the neighbours in their individual houses produced special greetings for the street’s oldest residents, Robert and Isabelle Douglas who were celebrating their Diamond Wedding Anniversary (60th)and they were serenaded by the sound of The Three Tenors singing Brindisi.

Isabelle has had a couple of bad falls and has not been out of the house for months, but made it to the door to find ALL of the neighbours had made cards, put up balloons and were applauding them in what was a very emotional few minutes.

This is what keeps communities going during the 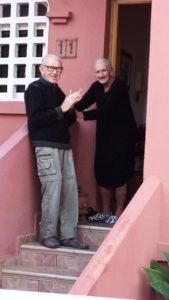 Robert and Isabelle celebrating 60 years together

crisis and if anyone would like to see the event and leave good wishes to the couple, visit Martyn’s Facebook page and he will pass them on;

Axarquía - Costa Tropical
A fire that broke out on a boat in Motril port was extinguished one hour later by the emergency servicesMaritime Rescue and the Motril...

From the stands: Elche vs Real Madrid in the Copa del Rey

Costa Blanca South
From the stands: Elche vs Real Madrid in the Copa del Rey.FROM the stands of the Estadio Manuel Martinez Valero, I enjoyed my first...