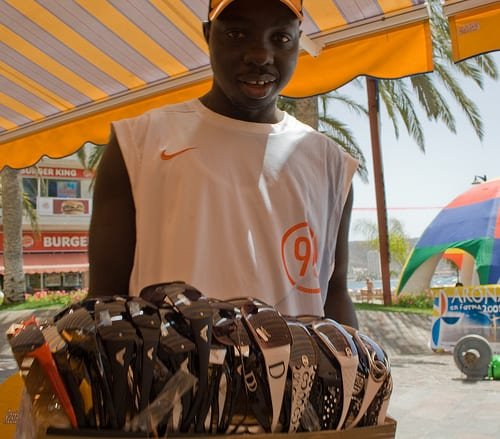 THE life of the lookey lookey man on the Costa del Sol is normally one of up and out early selling their illegal wares ranging from belts to watches and many other fake accessories.

Life though on 14 days of lockdown has seen them stuck in their bolt holes, no income and sharing houses with up to 15 others who apply their trade normally.

Tensions though have exploded as the illegal traders have gone stir crazy and many fights have broken out forcing landlords to evict them for domestic battles as well as non paid rents.

Riot police have been called to many instances and slum dog landlords have been given the reason to evict on a plate as cash income dries up for rents as the ‘bosses’ of the illegal traders stop paying cash to them.

Six evictions have taken place so far as we know on the back streets of Los Boliches and up the Mijas road where the traders normally reside after many hours of walking the streets selling.


This has resulted in over 60 illegal traders being unhomed during lockdown although whilst some have been arrested for assault and whereabouts unknown, others are back on the street dodging the cops, some hiding under bridges and other various locations, whilst some very lucky ones have been taken in by residents.

We caught up with ‘Eric’ who is one of the lucky ones currently being provided a roof over his head by Phil Schofield of Torreblanca and he told us:


“It’s not good man, we all got kicked out, there was 14 in our little house, arguments and fights broke out over thefts money and food, everyone going mad and fights breaking out, the police turned up in four riot vans and took the fighters away, we were then ordered to leave the house by the landlord, the bosses normally pay the rent but as we can’t pay the bosses aren’t paying the landlords who normally take cash weekly.”

“Some have tried going to homeless shelters, some are on the street, I was lucky as I know Phil and he saw me out by the bridge up by the hotels and said come stay with me, so I have.”

“The bosses don’t care about us now, we can’t feed them cash, so they don’t care at all, they have even stopped coming down from Malaga City as there is no money to collect.

“The landlords and bosses normally work the racket together, they have now fallen out and we end up on the street starving as the bosses don’t pay and the landlords call the police over anything and kick us out.

“I’m sleeping on a bed now thanks to Phil for the first time in 14 days, normally at the house we share shifts to use a bed but when we are all holed up together, no beds are available,” finished ‘Eric.’

The situation across the coast only looks like it will get worse as business dries up for the bosses of the street sellers with still at least another 14 days of lockdown to go.