VALENCIANS TRAPPED IN PERU, BALI AND ARGENTINA SAY “EVERYONE HAS WASHED THEIR HANDS”

Spanish nationals trying to leave Peru, Bali or Argentina feel “abandoned” and left to determine their own fate.

The coronavirus crisis has left many citizens of the Valencian Community abroad, desperately trying to return home. At the moment, the options are few and they have yet to be offered a solution by the Spanish Government, they feel betrayed. 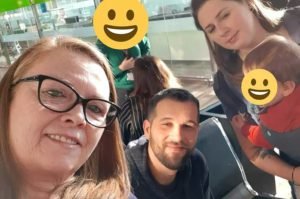 Víctor Soler and his family at the airport leaving Spain, now they cannot get back.

Víctor Soler, an Alicante chef, travelled to Argentina on March 5 with his family. Despite the fact that they had first-class tickets to return with Iberia Airlines, the flight was cancelled and that is where the problems began.


“Apart from being in quarantine since we arrived, we have tried by all means to get a return flight but they have not given us a solution,” explains Víctor, who remarks that he has been “fighting” with the airline for a week.

“The answering machine on the customer service phone will refer you to the website and the website will send you to the phone again. The only thing they have confirmed is that the flight is cancelled and that they will send us a voucher with the refund of the amount of the tickets”!

Victor says that from the moment they registered with the Spanish consulate in Argentina they have not received a satisfactory response.

“The only thing they have told us is that we look for ourselves a flight to another country that does not yet have its borders closed with Spain, such as Cuba, Brazil or the United Arab Emirates.

“That is very risky because at any time those countries can cancel flights or close their borders and we would be trapped in another country, where we couldn’t afford a hotel.

Victor is travelling with his mother-in-law, his wife, and their one-year-old son. Fortunately, they are staying at their brother-in-law’s house and the disease, for the moment, does not pose a serious threat in the country.

Víctor highlights the “disappointment” he feels at seeing how the Spanish Government has failed to fulfil its promise. “A few days ago I saw President Sánchez reassuring the Spaniards that they are making sure that they are going to repatriate us.

“I felt very safe but after this journey one feels totally abandoned. Here everyone has washed their hands of us and nobody offers any answer. All we want to know is that we have a flight so we can go home,” he says.

Last week Aerolineas Argentinas sent them an email in which they offered them a flight with a cost per head of $900. They reluctantly accepted because it was the only viable solution. However, yesterday they received another email informing them that this flight is now not going to leave and that there is no possible way for them to return to Spain.

Victor: “In the same email they inform us that the flights are travelling empty to Madrid to repatriate Argentines, this shows me that there is no interest or solidarity. Just as empty planes are going to Madrid, they could be full, with us,” he points out he is angry and fed-up.

On the Indonesian island of Bali, a group of Spanish women, mostly Valencians, who travelled there a week ago to participate in a yoga retreat are frantically trying to find flights out of the country.

Among them Ana Micó, a native of Xàtiva but settled in Alcoy, who explained yesterday that the situation is “very complicated”.

They were relocated on a flight through Singapore which was the last solution offered by the travel agent. However, in this Asian country, you can only fly if you have been there for more than fourteen days. They arrived nine days ago from Spain.

The Lufthansa company, with which they were going to travel, has canceled 95% of the flights and they feel “helpless”.

Another problem is that tickets through other routes are too expensive and because the situation can change in a matter of hours they also risk arriving at the airport and having the flight cancelled.

“It is very risky because, in addition, the companies are not returning the money for the cancellations.” For all these reasons, the group remains in a very tense state, although they stressed yesterday that “apart from everything else, we are fine.”

Last Friday, they managed to be relocated again on another flight scheduled for Saturday at the last minute to Japan and from there, there was the possibility of buying a ticket to Amsterdam. “First we have to trust that it is not cancelled at the last minute and then when we arrive in the Netherlands, find a way in which we return to Spain,” said Micó.

Do you know anyone stranded in another country and trying to get back to Spain? We would really like to hear your story.

This news article is brought to you by Currencies Direct

Currencies Direct’s mission is to make people’s/businesses lives easier by making the flow of money around the world simpler and more direct. They change money from one currency into another. There’s more to it than that, but they like to keep things simple.
Let’s talk currency! Contact them now on 950 478 914 or http://www.currenciesdirect.com

THE COVID-19 crisis continues in Catalonia