Tottenham midfielder Eric Dier shocked his own team-mates after he climbed into the crowd and clashed with his own fans after his side were dumped out of the FA Cup by Norwich.

The footage was soon posted on social media of the Spurs and England star hurdling seats at the north London club’s home stadium to confront a supporter before they were separated by security staff. 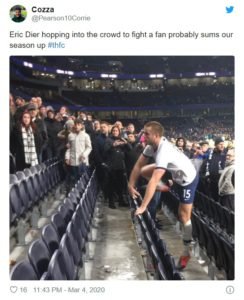 Following the match and incident, Tottenham manager José Mourinho said: ‘I think Eric did what we as professionals cannot do’

At the post-match press conference, Spurs manager Jose Mourinho said: “I cannot run away from the question and I think Eric Dier did something that we professionals cannot, but, in these circumstances, something that every one of us would do.


“When someone insults you and your family is there, and your family gets involved with the person that is insulting you, in this case, your younger brother, I think Eric did what we professionals cannot but, I repeat, probably every one of us would do. I am with the player and understand the player.”

Sky Sports’ Lewis Jones, who was at the Tottenham Hotspur Stadium for the fifth-round tie, said there was “huge commotion in the stands where Dier made his way over the advertising hoardings”.