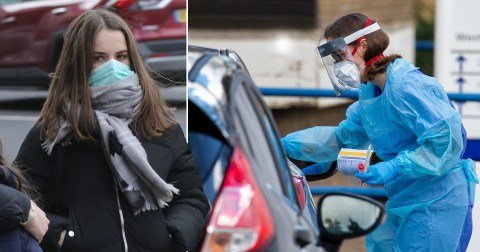 Another 34 people have tested positive for coronavirus in the UK, bringing the total number of cases to 85, with Spain currently at 150.

Professor Whitty said 29 new cases had recently travelled from countries where coronavirus has spread, but it’s not yet clear where a further three patients contracted the virus.

The updated toll was released after Scotland recorded another two cases this morning and the total case number was around 50.

Professor Whitty said the NHS would cope with a major spread of cases but could come under ‘very high pressure’ in a large epidemic.

He said: “For the great majority of people this will be a mild or moderate disease, anything from a sniffle to having to go to bed for a few days rather like with mild flu.

“There are some people who will get it with no symptoms at all, but for a minority of people – and this is particular in people who are older people or people with pre-existing health conditions – the risk is higher.

“The NHS will always cope because the NHS is an emergency service which is very good at adapting to what it finds itself with.”

He added that the NHS would look to retired doctors for help, as well as ‘getting doctors doing one kind of a job doing another kind of the job.’