The UK  braces itself for heavy winds this weekend and the second wettest February on record.

Storm Jorge is set to dump more rain on parts of Wales and northern England with flood-hit communities being put on alert again.  Met Office’s chief meteorologist, Paul Gundersen, said further flooding is possible with between 50 and 80mm of rain forecast for Friday. 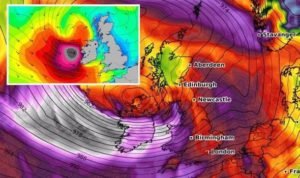 Strong winds are forecast for much of England, Wales and Northern Ireland on Saturday, reaching 80mph in coastal areas and up to 60mph inland.


Flooding along parts of the River Severn, which has reached close to its highest levels in some areas, is likely until at least Sunday, the Environment Agency said.

A severe “danger to life” flood warning covering the river at the Wharfage in Ironbridge, Shropshire, remains in place on Thursday, while 82 flood warnings and 125 flood alerts have been issued.


Rising waters pushed back the town’s temporary flood barriers towards a pub and other businesses, sparking fears that the defences could be fully breached.

Residents in the Worcestershire town of Bewdley were forced to evacuate earlier after the river spilled over barriers at Beales Corner.

And in East Yorkshire, residents were being evacuated from the village of East Cowick after the River Aire broke its banks.

This month is already the second wettest February on record, with the total average rainfall from February 1 to 25 measuring 179.3mm, the Met Office said.