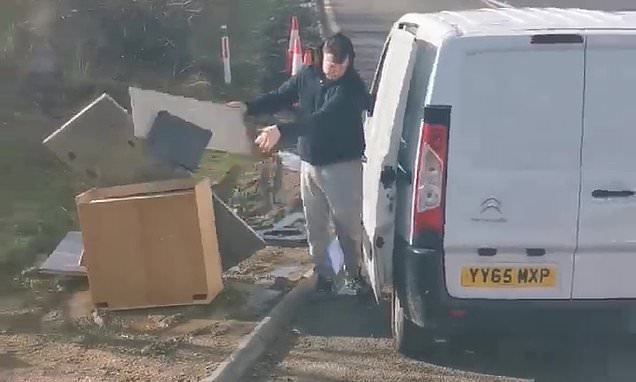 A lorry driver captured the moment careless fly-tipper dumps a load rubbish next to a busy dual carriageway in broad daylight.

The shameless criminal was seen by the lorry driver who had parked up in the lay-by. Dashcam footage shows the fly-tipper arriving in a white Citroen.

The man begins to drag pieces of old furniture from the side door of his van. He can be seen launching pieces of carpet, office furniture and other waste onto the verge alongside the lay-by before driving away from the scene.

The shocking events happened on Thursday afternoon on the A428 near Cambourne, Cambridgeshire, with traffic passing by.

The unnamed lorry driver said: “I was taking a break on the lay-by when I saw the van pull up in front of me.

“The driver then got out of his van, opened the rear doors and started throwing bits of wood and furniture onto the ground.

“I honked my lorry’s horn at him, but he just turned around and told me to ‘f**k off.”

In England fly-tipping is a criminal offence punishable by a fine of up to £50,000 or 12 months in jail at magistrates court.

The offence can attract an unlimited fine and up to five years imprisonment if convicted at crown court.