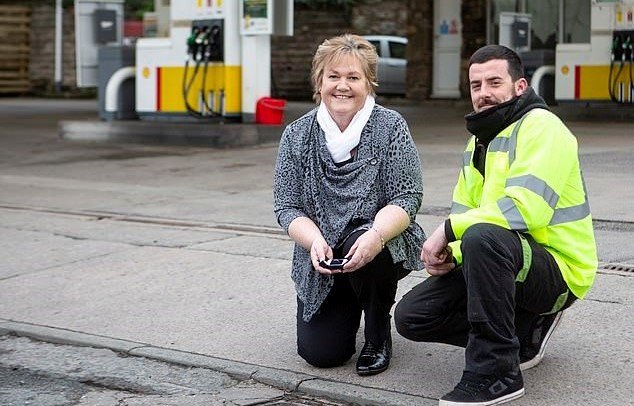 A mother who lost a nine carat gold ring after it slipped from her finger as she was filled up her car with petrol, has been reunited with her jewellery 15 years later.

Sarah Warfield’s long-lost ring was discovered by drainmen flushing out a sewer next to a garage in Crickhowell, Powys.

The ring, passed down by her grandmother, was posted in an appeal for it’s owner on social media by a sewage cleaner.

Mrs Warfield, 49, a retried police officer, says she ‘welled up in tears’ when she saw the inherited ring over a decade after losing it.

She said: “I went to the garage in the morning to fuel the car up. It was cold that morning and I didn’t always wear it, but I had worn it that morning.

“I’d gotten some petrol or some diesel on my hand so I shook it and wiped it with paper towels.

“I didn’t notice it was gone until later – I rang the garage but they couldn’t locate it. They had emptied out the bins onto the floor but they just couldn’t find the ring.

“It was cold so I think my hands contracted so it must have slipped off.”

The H. Samuel gold ring was made in Birmingham in 1948 and was a family heirloom belonging to Mrs Warfield’s grandmother.

Ben Simpson, 32, found the ring with his colleague when they were cleaning 250 metres of sewer line with high pressure jets.

“I knew the sentimental value would be massive. I know my gran lost hers and she was distraught, so I like to think I’ve helped,” he said.

From the stands: Elche vs Real Madrid in the Copa del Rey

Spain Football
From the stands: Elche vs Real Madrid in the Copa del Rey.FROM the stands of the Estadio Manuel Martinez Valero, I enjoyed my first...