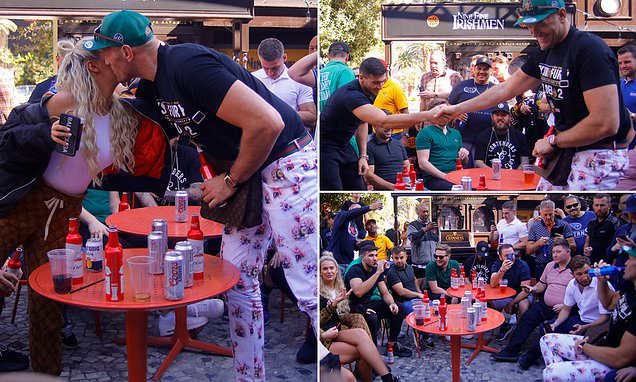 Tyson Fury continued his celebrations on Sunday with a day drinking session at an Irish pub opposite the MGM Grand. He was accompanied by brother, Tommy, and his girlfriend Molly-Mae.

The Gypsy King was celebrating his historic victory over Deontay Wilder on Saturday night, where he won via a 7th round TKO. Fury and his group took to the Irish pub the following day to toast his magnificent performance.

Fury was seen drinking a Budweiser at the Nine Fine Irishmen bar with his brother Tommy and his girlfriend – who both appeared on ITV’s Love Island last year.

As always, Fury was happy to pose for pictures with his fans who were also overjoyed with the victory.

Tyson Fury spoke about a potential rematch with Wilder, as a clause in their contract enables Wilder to a rematch in the summer. He said he hoped the trilogy fight could take place in the Raiders Stadium, should the rematch be set.

Boxing fans around the world are hoping that Wilder doesn’t exercise his rematch clause, allowing Tyson Fury to fight Anthony Joshua in attempt to unify all heavyweight title belts.